In 1868, while Lord Armstrong was enthusiastically buying Ridley land in Heaton, he acquired a plot north of Heaton Hall as far as Benton Bank: it included areas then known as Bulman’s Wood and Low Heaton Farm (the farmhouse was by the junction of Benton Bank and the Ouseburn Road: see map) plus three abandoned coal mine sites – the Thistle, the Knob and the infamous Chance Pit up by the windmill. This entire plot was bordered along its western edge by the Ouseburn Road, its southern boundary by Jesmond Vale Lane and the eastern side by Heaton Lane (now Road). After giving Armstrong Park to the people of Heaton, two new roads were planned through the remainder of the land which had been divided up and offered for sale as thirteen residential plots of between two and four acres each. This extravagant development would be named The Heaton Park Villa Estate: millionaire mansions by the baker’s dozen. There goes the neighbourhood! 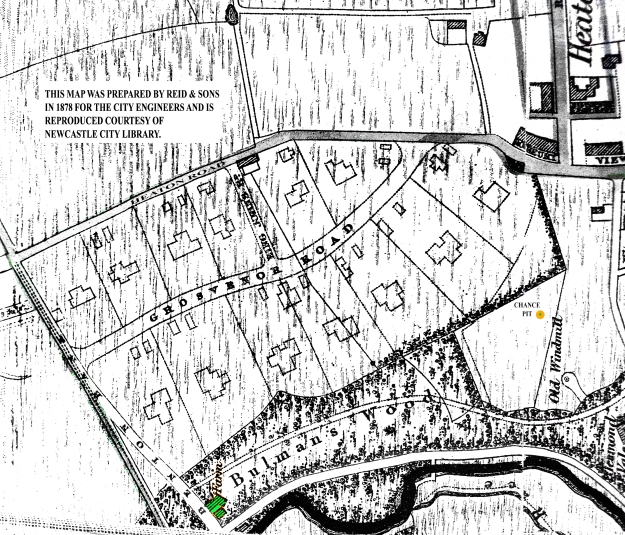 The following illustration shows the plots in relation to today’s developments. 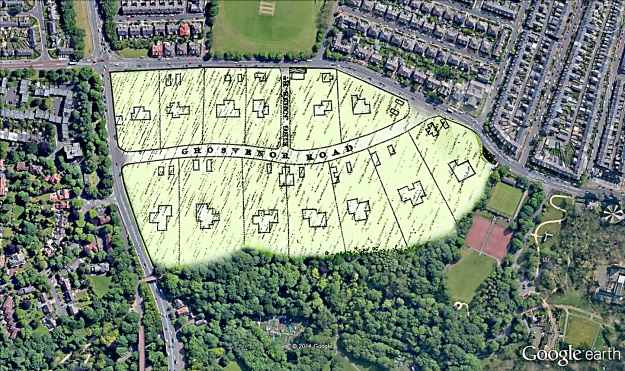 This last illustration indicates how little more than half of the estate was ever developed (more on this is to follow) while the remainder was given over to an allotment complex of two halves: the small northern section called St Gabriel’s Allotments and the larger southern portion known as the Armstrong Allotments. 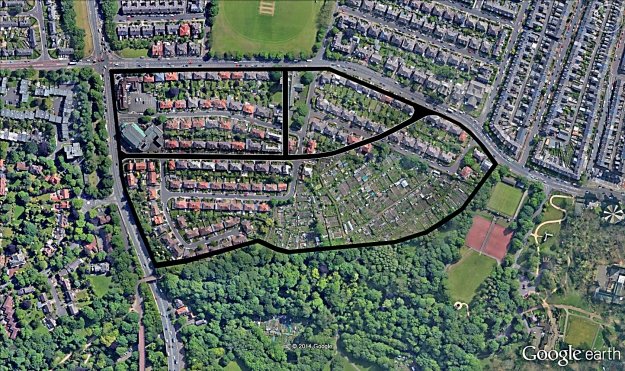 Back at the ranch

A letter dated 1884 to Sir William from his Newcastle architect Frank W. Rich of Eldon Square (who was later to design St Gabriel’s Church) explains how the original 13 large plots have been abandoned in favour of 41 plots of between one-third and one acre-and-a-half. He indicates that these smaller sizes are what buyers are looking for and that anyone needing more may simply buy multiple plots. One such gentleman for example – Mr Thomas H. Henderson of Framlington Place (behind the Dental Hospital) – asks for a particular 1.5 acre plot at an offered rate of £500 per acre when Sir William is looking for £600. This tells us what a four acre plot would have actually cost and why there were obviously no takers for such sizes, especially when you consider that the largest residential plots anywhere in Newcastle were an acre and a half.

The layout for the forty-one plots was never lodged with the planning department and it seems likely that the outlined houses shown on the original thirteen plot plan were simply random or figurative, and that each house would have been designed (hopefully by Mr Rich) to the specifications of the buyer. There were certainly no house designs lodged with the planning department for either the thirteen plot estate or the forty-one plot version.

Mr Rich further explains to Sir William that the roads were run by necessity according to the gradient of the land. Looking at the terrain today indicates that the largest sites – those bordering the park – would have been on relatively flat ground down at low level, but with no prospect beyond their own boundaries; while the smaller Heaton Road sites would have occupied the high ground looking out across the park. I don’t think anyone buying a four acre plot down below would have been greatly enamoured of their neighbours in the cheap seats lording it over them; would you?

However, thirteen or forty-one soon became immaterial because it didn’t take long for surveys to reveal that much of this land was actually one giant sand-hill and totally unsuitable for house building purposes, unless it was to mix with cement. Mr Rich does inform Sir William at a later date that they now have sand, stone and brick immediately to hand on their land in Heaton (where was the stone quarry?) and that builders could buy it all directly on site. Oh, how the rich get richer! But…

Ever the benefactor to us hoi-polloi, Lord Armstrong’s will said that the entire area be reserved as allotments for those tenants of his Heaton development lacking gardens of their own – which was a lot of them. Sir William’s heir was forced to apply for an act of Parliament in order to overturn the will and develop such areas deemed suitable for construction – but not until the nineteen-twenties when housing shortages had become a government issue.

If you own a house in Heaton and have the deeds and other documents and would like to know more about its history, get in touch via chris.jackson@heatonhistorygroup.org and we’ll try to help. If enough people are interested, we might be able to arrange a course in researching your house – and could even help with the research depending on demand.

1 thought on “The Heaton Road Millionaires’ Row That Never Was”