Famous words but in the millions spoken or written to mark the 50th anniversary of men first landing on the moon, few have mentioned the importance of a former employee of CA Parsons in Heaton, Francis Thomas Bacon. Yet after the event Tom Bacon met President Nixon, who put an arm around his shoulders and said ‘Without you Tom, we wouldn’t have gotten to the moon’.

Tom and his wife Barbara also received an invitation to 10 Downing Street to meet the astronauts, Neil Armstrong, Buzz Aldrin and Michael Collins during their world tour. Tom was presented with a signed, framed photograph of Neil Armstrong’s first step onto the moon, with the words ‘To Mr Francis Bacon with best wishes from the Apollo crew’. 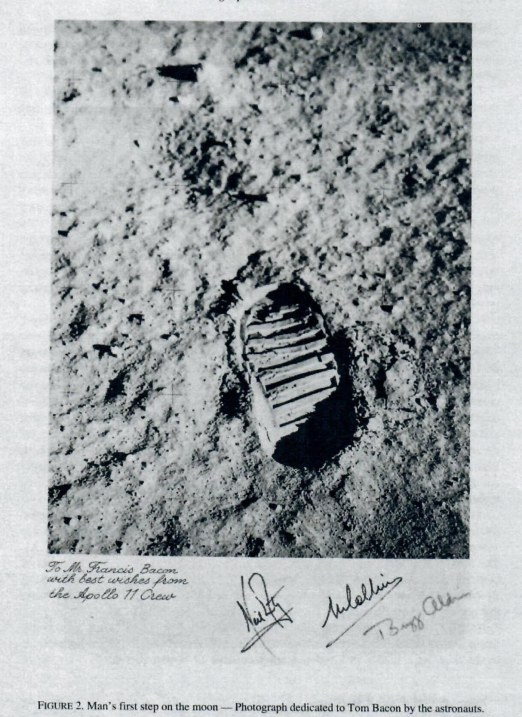 But it was a mention of Tom receiving an honorary degree from Newcastle University (without any mention of his part in Apollo 11 only 11 years after the event) in a ‘Journal’ article, celebrating the 900th anniversary of the foundation of Newcastle and the building of its castle, that prompted Heaton History Group’s Arthur Andrews to dig a bit deeper into the life and achievements of  a distinguished engineer with Heaton connections. 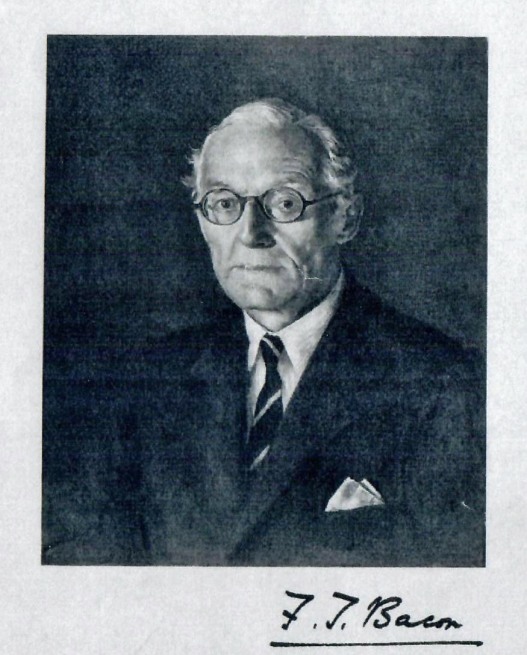 So who was this former Parsons apprentice and worker and what role did he play in one of mankind’s greatest achievements?

Francis Thomas Bacon was born in Billericay, Essex on 21 December 1904, son of Thomas Walter Bacon, a land owner and an electrical engineer and a direct descendant of Sir Francis Bacon (1561-1626), the famous philosopher, statesman, scientist, jurist and author.

Young Francis (known as Tom) was educated at a preparatory school in Broadstairs before going on to Eton from 1918-1922 and winning the school physics prize before  taking the Mechanical Sciences Tripos at Trinity College, Cambridge .

After graduation in 1925, Bacon was offered an apprenticeship at C A Parsons in Heaton, Newcastle upon Tyne, during which he worked in the drawing office, engineering workshops and also did outside installation work. As a scientific engineer, he did work on improving reflectors for searchlights and lights used in the film industry. From 1935-1939 he was in charge of the production of silvered glass reflectors. He lodged in nearby Jesmond before, on his marriage to Barbara Papillon in 1934, buying Acomb House near Hexham.

The renowned British scientist, inventor and judge Sir William Robert Grove had discovered the principles behind the operation of fuel cells between 1839 and 1842 but these were not pursued until Bacon became intrigued with their potential while working for Parsons.

In 1937 he wrote a report, ‘Proposed Electric Storage Battery’, for the directors of Parsons, suggesting that a workable fuel cell might be developed as part of an energy storage system, which released energy from the electrolysis of water into hydrogen and oxygen. The proposal was rejected as not being relevant to the business.

Tom, however, was financially independent and could help finance some of his own experiments. So undeterred, he carried out early experiments at home but discovered that to continue was impractical because of the high pressures and temperatures involved. Soon, without permission, he began carrying out his experiments at the Parsons works. He made arrangements to be warned if the managing director, F G H Bedford was nearby. This worked for a time but on one occasion the MD saw the apparatus but not Tom Bacon, as he was in hiding. Fortunately, no awkward questions were asked.

In 1940 a second report was sent to the directors and Bacon admitted that he had been doing experiments in his employer’s time. This time, the managing director F G H Bedford (who worked at Parsons for 60 years!) gave Bacon an ultimatum, either to stop working on the cell or leave Parsons, so he left. History would show that this was very much Parsons’ loss.

Bacon went on to do experimental work on hydrogen-oxygen cells at King’s College, London and for Merz and McLellan before becoming an experimental officer with H M anti-submarine establishment and then consultant on fuel cells to the National Research Development Council. His ideas were developed further by US firm, Pratt and Whitney.

‘The Daily Mirror’ on Wednesday 14 February 1973, ran an article with the headline:-

‘As yet another invention reaches crisis point..WHO CASHES IN ON BRITISH BRAINS?’

The article states that it’s one of the clichés of world industry that the best inventions are British – for the simple reason that they make fortunes for everyone but Britain.

It goes on to mention many British inventions that were not financed in the UK and went on to make millions in other countries. Examples given were the refrigerator, celluloid, aniline dyes, the self-winding watch. In bold, the article continues:

‘Francis Bacon, without whose revolutionary fuel cell the Apollo moon-landings would have been impossible, toiled away in agonies of frustration for thirty years. He even got the sack from one firm (C A Parsons) in 1940 for devoting himself to his invention. The Electrical Research Association gave him a grant and then withdrew it. Then the NRDC helped him as much as their budget allowed. But once again, the Americans came along and their millions finally made Bacon’s Fuel Cell, the “magic battery” work.’

And the rest is moon landing history!

Fuel cells are ideal for space travel applications because, unlike heat engines, they have rising efficiency with decreasing load. The Bacon Cell, as it became known, was the first to be powered by hydrogen-oxygen, which was, therefore, much more powerful than earlier versions. It allowed Saturn V, the rocket which propelled the Apollo 11 crew into space, to take off, and of course, hydrogen and oxygen gases were already on-board for propulsion and life support. The by-product, water, was used for drinking and humidifying the atmosphere of the capsule.

Bacon was a modest man. At the many awards ceremonies he attended, he would say: ‘Well I had nothing to do with it, it was all up to the engineers at Pratt and Witney’.

Yet without his dogged perseverance there would not have been a super-efficient fuel cell in the Apollo command and service modules. Certainly NASA recognised his contribution: at a dinner in London, Tom was presented with a gold-plated miniature of his fuel cell, mounted on a teak stand. 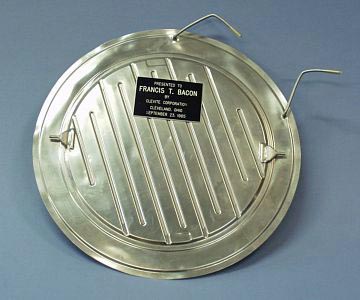 Tom also received a letter from Dick Foley, of Pratt and Whitney saying, ‘Please accept my personal congratulations for the contribution your fuel cells made to Apollo 11.’

1965 – S G Brown Award and Medal from the Royal Society

1972 – Churchill Gold Medal from the Society of Engineers

He is buried in All Saints Churchyard, Little Shelford, along with his wife Barbara and their son Francis, who pre-deceased them. The family lived in Little Shelford from 1946. They also had a daughter, Daphne and Edward. a younger son.

If you know more about Tom Bacon and especially if you have stories or photographs relating to his time at Parsons, we’d love to hear from you. You can contact us either through this website by clicking on the link immediately below the article title or by emailing chris.jackson@heatonhistorygroup.org