As you wonder whether to venture out in the pouring rain, stop for a moment instead to remember a son of Heaton living when even car rides in rain and snow would barely be tolerable. In fact, it was such a car journey back to Heaton from London that led to an invention we all take for granted. To make matters worse it followed yet another cup final defeat for Colin Veitch’s Newcastle United.  But the subject of our research, one Gladstone Adams, was notable for much more than the inventor of windscreen wipers.

Gladstone was born on 16 May 1880 and baptised at All Saints Church in the east end of Newcastle upon Tyne on 6 June 1880, one of ten children born to John and Agnes Adams. For many years the Adams family lived in St Ann’s Row, Ouseburn. Although, John ran his own business, life was hard: at the age of 16, Gladstone contracted typhoid and almost died.

The family business of marine salvage seemed to offer little scope to an ambitious and bright young man and so, after school, Gladstone Adams became apprenticed to Matthew Auty, a well known photographer in Tynemouth. (Apparently many years later after the photography business had closed,  renovation work revealed some writing on a beam that seemed to be a log of Auty’s employees over the years. It included the name of Gladstone Adams, suggesting  that he started work there in 1896, aged 16 and left in March 1901.)

Young Gladstone lived at a number of addresses in Heaton. At the time of the 1901 census, he was living with his mother and father and older sister, Grace, at 29 Eversley Place, Heaton. 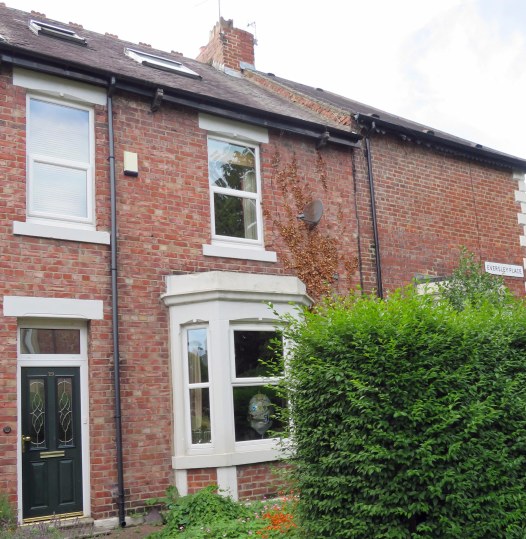 Eversley Place home of Gladstone Adams and his parents

Gladstone’s father died in 1902 and mother in 1909. They are buried together in All Saints Cemetery.

When Gladstone joined the Lord Collingwood Masonic Lodge in 1907, his address was given as 39 Lesbury Road (opposite pioneering Trade Union leader and MP Alexander Wilkie at number 36).

At this point, aged 28, he was described as an ‘art photographer‘. A later electoral role shows him in 1913 at 82 Heaton Road.

Although he lived in Heaton as a young man, the photography business Gladstone set up in 1904 was based in Whitley Bay. Adam’s reputation as a photographer was such that three years later, he was asked to take the official photographs of the newly launched ‘Mauretania’, leaving the Tyne. The image below apparently made him more than £1000  and has been acclaimed by ‘Photography’ magazine as a future ‘Old Master’. 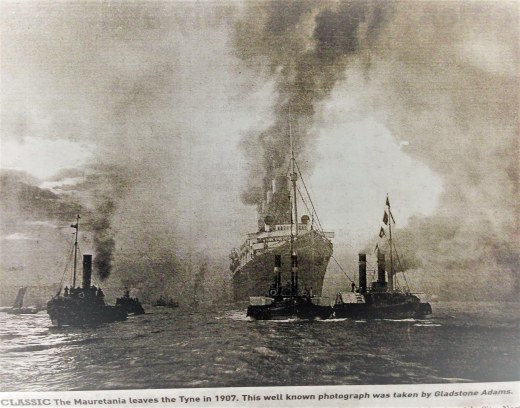 Adam’s business expanded with several more studios opening. By the end of the 1920s he employed in the region of 90 people. His work was extremely varied and besides the usual family and wedding portraits, he produced postcards of local scenes, worked as a commercial photographer for newspapers, police records and industrial organisations, as well as being the official photographer for Newcastle United, hence that difficult journey back from the cup final. 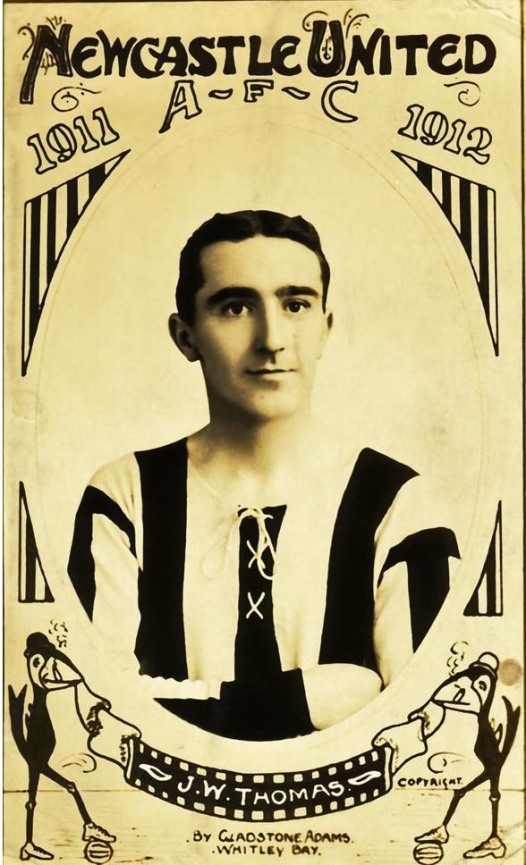 Adams (far left) at a meeting of Newcastle Photographic Society

Gladstone went on to be Chairman of the Professional Photographers Association. His business flourished for over 60 years until camera ownership became common and Whitley Bay had declined as a holiday destination.

And so it was in his capacity as successful businessman and official photographer to Newcastle United that, at the end of April 1908, Adams found himself driving back from Crystal Palace in his 1904, French made Darracq motor car. It was such an unusual sight that apparently the car was put on display while he was at the match.

As if watching the reigning champions  unexpectedly lose to Wolverhampton Wanderers wasn’t bad enough, the weather conditions for the journey home were atrocious with unseasonal snow falling. The only way Gladstone could clear his windscreen was with his hands, necessitating many stops. But much good came out of what must have been a miserable weekend. For it was on this arduous drive that Gladsone Adams said he came up with his inspired idea for a windscreen wiper (although it has to be admitted that in the USA, a Mary Anderson had patented a windshield wiper blade a few years earlier. These things are rarely straightforward!)

The prototype of Adams’ mechanism is on display at The Discovery Museum in Newcastle. Three years of development later, in April 1911, a patent was registered by Sloan & Lloyd Barnes, patent agents of Liverpool for Gladstone Adams of Whitley Bay.

In 1901, aged 21 Adams joined the Northumberland Yeomanry, which was a locally raised cavalry force. This enabled him to improve his horse riding skills and he won several competitions. He was about to have been sent to the Boer War but fortunately the war ended. Gladstone remained in the Yeomanry until 1910, retiring with the rank of Corporal and a good conduct certificate.

In 1914, aged 34, he volunteered to serve in WWI. Because of his photographic skills, he joined the Royal Flying Corps as a reconnaissance photographer with the 15th Wing in France. In April 1918 he was stationed at the front, close to where the German flying ace, Baron Manfred von Richthofen, was shot down and killed. Adams was given the unenviable task of photographing the deceased pilot to prove that ‘The Red Baron’ had really been killed. He was then involved in the preparations for the pilot’s burial, with full military honours, at Bertangles Cemetery, near Amiens. After the war, Adams’s military service was recognised by the award of the permanent title of ‘Captain’ on his discharge papers.

By the outbreak of WWII Gladstone was approaching 60 but he nevertheless he served as Flight Lieutenant with the 1156 Air Training Corps in Whitley Bay.

In 1914 at the age of 34, Gladstone had married the talented artist, Laura Annie Clark. He had served in the Royal Flying Corps alongside Laura’s brother, Joseph, also, like their father, Joseph Dixon Clark senior, an artist.

Laura was a notable painter of miniatures whose work was exhibited at the Royal Academy and Paris Salon as well as provincial galleries, including the Laing. Her 1923 miniature on ivory depicting herself and her son, Dennis, entitled ‘The Green Necklace’ was given a place of honour at the 1923 Royal Academy exhibition between portraits of George V and Queen Mary. Laura was also a talented musician and composer. She worked as a colourist at Gladstone’s photographic studio. The Adams’ married life was mostly spent in Monkseaton. Dennis, born in 1920, was their only child.

in the 1950s, after hearing that a squad of Royal Marines were tragically run down by a lorry on a dark road, Adams developed a prototype fluorescent belt for pedestrians to wear at night. He and his brother also invented the ‘trafficator’, a forerunner of the car indicator, as well as the sliding rowing seat.

Adams was one of Whitley Bay’s longest serving councillors, holding St Mary’s Ward from 1937 to 1948. He also served in other wards in the 1950s and early 1960s, finally losing his seat in 1963. He was also a Northumberland County Councillor.  Gladstone and his son, Dennis, were councillors together for a period of time.

Gladstone Adams died, after a very eventful life, aged 86, on 28 July, 1966,. A commemorative plaque is located on the west facing, gable end of the Ouseburn Mission building, very close to the house in which he was born.

If you know more Gladstone Adams, especially his early life in Ouseburn and Heaton,  or have photos to share, we’d love to hear from you. Please get in touch either by clicking on the link immediately below the title of this article or by emailing chris.jackson@heatonhistorygroup.org

‘The Journal‘ 10 April 2008 Report by Tony Henderson that a significant amount of memorabilia belonging to Gladstone Adams was to be auctioned.

‘The Toon: a complete history of Newcastle United’ / by Roger Hutchinson; Mainstream, 1997

Findmypast, Ancestry and other online sources.