This rare photograph, of the visit to Newcastle in August 1884 of the Prince and Princess of Wales, was taken by Thomas Maitland Laws. This was the visit on which, after passing down Shields Road, North View and Heaton Park Road then through Heaton Park, they officially opened Armstrong Park and Jesmond Dene.

Almost all the images you will see of this famous event are drawings and engravings because to take documentary photographs of moving subjects was still a big challenge at that time. Thomas clearly understood the photograph’s commercial value because within a week of taking it, he had registered the copyright. It is, as a result, held in the National Archives,  where we found it.

Prince and Princess of Wales, Newcastle August 1884. Perhaps you can help us identify where it was taken.

Although Thomas was living in the centre of Newcastle at this time, he later lived in Heaton. During this period, he owned a photography business based on Shields Road West.

Thomas was born in Paddington on 2 July 1855 to Isabella and Peter Maitland Laws. Although both Thomas’s parents were northerners (Peter, Durham born, and Isabella from Cumberland), at this time they were living in London where Peter worked as a carpenter.

However by 1861, the Laws had moved back north with children Henry, Thomas, Sarah and Peter. The family lived in Grainger Street in the centre of Newcastle and Peter was now earning his living as a photographer.

Thomas was thus exposed (forgive the pun) to photography from a very early age at a time when some of his neighbours and indeed his own father were at the forefront of the development and popularisation of a still new medium.

The first mention we have found of Thomas in the press is in July 1867 when, aged 12, he was announced as the winner of the not inconsiderable sum of five shillings, having achieved second place in the ‘Triple Kites’ category of a kite-flying contest on the Town Moor. The previous year a photograph to be taken by his father had been announced as the prize for the various winners.

Thomas’s father, Peter Maitland Laws, had been a professional photographer for at least eight years at this point. He was listed in the trade directories of 1859-60 as a ‘photographic artist’, living in Pilgrim St and operating from Northumberland Court (which still exists between Waterstones and Jamie’s Italian on Blackett Street), at a time when, although there were a number of ‘photographic artists’ practising in Newcastle, the occupation did not yet appear as a category in the classified listings. (1839 is generally considered the year in which commercial photography was born and it was the year the term ‘photography’ was coined by ‘father of photography’, the astronomer and chemist, John Herschel. But the medium took off slowly at first due to significant technical constraints.)

It was two years later after Laws’ first listing in the trade directories, in  1861, that the Newcastle and North of England Photographic Society was formed. Peter was a member of its original ‘council’ and later became treasurer. At the society’s first meeting, he presented ‘two proofs of his very beautiful views of the ruins of Tynemouth Priory’.

Important technical developments to the art form were still to take place: here in Newcastle in 1864, Joseph Wilson Swan, who owned a ‘chemical and photographic establishment’ on Mosley Street with his brother in law, John Mawson, perfected and patented the carbon process, an early method of producing permanently fixed photographs. It wasn’t for another 13 years, in 1877, that the same inventor perfected dry gelatine-bromide plates which made enlargements possible.

But in the meantime, photography was booming, with small photographic visiting cards becoming hugely popular.  Laws’ business, by now based in Blackett Street, must have been doing well because, by 1871, Peter and Isabella’s elder son, Henry, had followed his father into the firm, while 16 year old Thomas worked as a lithographer. This photograph of Thomas Laws’ grandparents, William (born in Wolsingham, Co Durham in 1793) and Sarah (born in Paisley, Scotland in 1790) dates from this time. 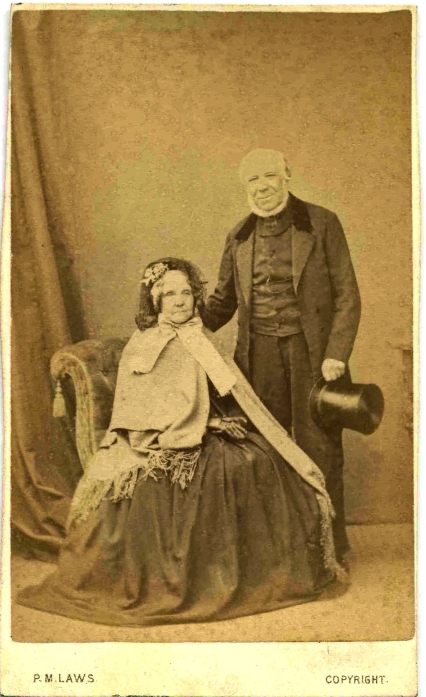 Peter Maitland Laws didn’t rest on his laurels. He was said to be one of the first photographers to take portraits using artificial light when he introduced gas lighting into his studio.  In 1879, he advertised ‘Portraits in Dull Weather and at NIGHT with Laws’ “light irradiator”‘ and ‘Portraits in winter equal to summer: gas nights, Tuesday, Friday and Saturday 6-8’. And in February 1880, he made history when he used gaslight to take the first ever photograph of a performance at the Theatre Royal.

He was experimenting with ‘colour photographs’ at around the same time. 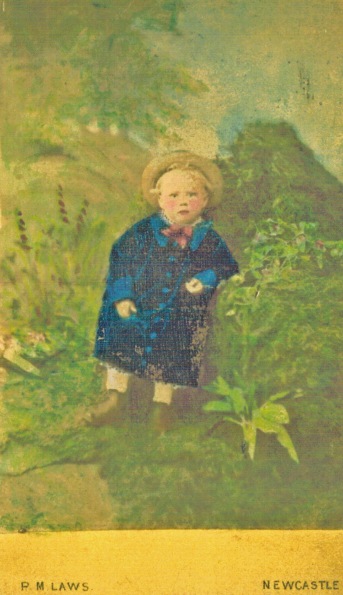 Peter’s ability to innovate as well as his photographic skill meant that, not only did his business continue to thrive, but he continued to be awarded personal accolades and prizes. In 1887 two of his award-winning photographs were included in the Newcastle Royal Jubilee Exhibition. 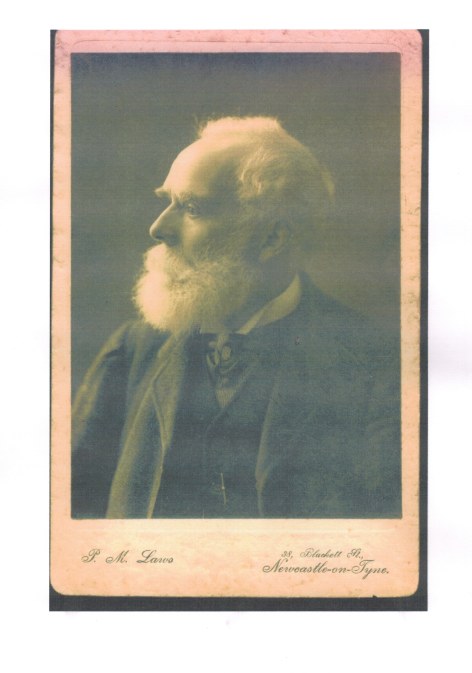 By 1881, aged 26, Thomas had followed his father into photography.  He was by now married and living in St Thomas Square with his wife Elizabeth, who hailed from the Isle of Bute. The couple were well enough off to employ a live-in servant.

It was around this time of his photograph of the royal visit that Thomas formally became a partner in the family business, which was retitled ‘P M Laws and Son’. In 1887, P M Laws and Son claimed to be ‘the largest and oldest established gallery of photography in the North’. 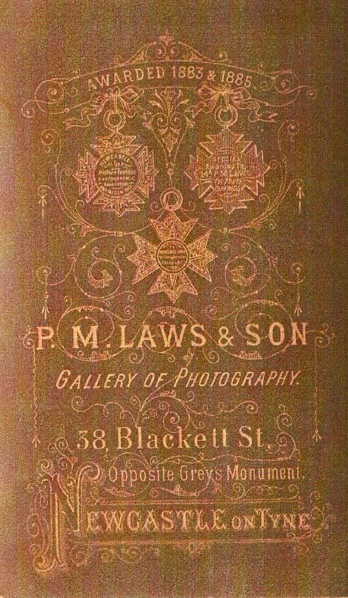 Reverse of a P M Laws and Son photograph

However, whether because Thomas wanted to move out of his father’s shadow or for some other reason, Thomas and Elizabeth didn’t stay in Newcastle. By 1891, they were living in Staffordshire with their young family: Amelia, aged 9; Maitland, 7, and Angus, 3. Thomas’s business was in Darlington Street, Wolverhampton. A number of his photographs from this time are in the National Archives, notably two of Wolverhampton Wanderers 1893 cup winning team.

The family returned north, however, first to Cumberland, where Thomas ran a photographic and art supplies shop, and then, perhaps because Thomas’s father, Peter, had died in 1906, to 24 Addycombe Terrace in Heaton, where Thomas was a self-employed photographer once more, with a studio at 42 Shields Road West. One of his neighbours at no 55 Addycombe Terrace was his younger half-brother, Albert Heath Laws, also a photographer.

By 1911 Thomas and Elizabeth’s 23 year old son, Angus Ferguson Laws, worked as his assistant, the third generation of the family to become a photographer. But sadly Angus, a Private in the Grenadier Guards, was killed in France on 27 September 1918, aged 30, just weeks before the end of WW1. He is remembered at the Grand Ravine British  Cemetery, Havrincourt.

Thomas had moved from Addycombe Terrace to 7 Warwick Street a few years earlier but by 1921 the Shields Road West business had closed and Thomas had moved back to the midlands. He died in  1928 in Warwickshire.

June Howard, a great great granddaughter of Peter Maitland Laws, who now lives in Australia, kindly sent us some family photographs, including those seen here, and told us that photography ran in her family: ‘My understanding is a few of PM Laws children took up photography. My grandfather, Percy Maitland Laws, certainly did all his own developing. I remember we couldn’t use the bath room as it was his dark room.’

‘One Hundred Years of Photography in the North’, J Arnold Little, 1960

‘Sun Pictures: the Lit and Phil and the history of British photography’,Anthony Flowers and Alison Gunning; Lit and Phil, 2014

Catalogue of the Newcastle Jubilee exhibition (at the Lit and Phil)

This article was researched and written by Chris Jackson as part of Heaton History Group’s project to commemorate the 400th anniversary of William Shakespeare’s death.

There are a number of streets in the west of Heaton which have names associated with Shakespeare: Bolingbroke, Hotspur, Malcolm, Mowbray and Warwick Streets plus Stratford Grove, Stratford Road, Stratford Grove Terrace, Stratford Grove West and Stratford Villas. We would love to discover why they were so named and we will research and write about some of the people who, like Thomas Maitland Laws, have lived or worked there.

We are also interested in other connections between Heaton and Shakespeare through its theatres, past and present; writers, actors – and of course, the famous brick Shakespeare on South View West. 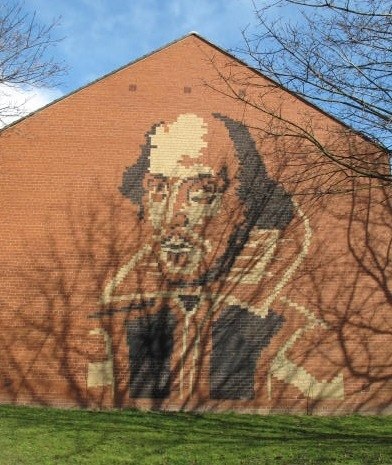 If you would like to get involved or have any information or memories that you think might be of interest, please contact us, either by clicking on the link immediately below the title of this article or by emailing chris.jackson@heatonhistorygroup.org

The Photographer and his House