In the Newcastle trade directories from 1914-1923 the head of household of 2 Warwick Street, Heaton,  George Kingdon, was described as a ‘herbalist’. We decided to try to find out more about Mr Kingdon and the practice of herbal medicine in Newcastle and, especially, Heaton. Our research threw up some fascinating characters.

A bit of history

The practice of looking for therapeutic properties in plants dates back thousands of years, with the ‘Pen Tsao’ or ‘The Great Herbal of China’ dating back to c3000BC and the ‘Ebers’ papyrus, which listed around 700 herbal medicine used in Egypt, to about 2000BC. In ancient Rome, Pliny believed that there was a specific herbal remedy for every disorder, if only it could be found.

In Britain, Nicolas Culpepper’s ‘English Physician and Complete Herbal’ was published in the middle of the seventeenth century but, unlike in ancient China, Egypt and Rome, Culpepper incorporated magic and astrology into his work. When belief in magic faded, the popularity of herbalism waned too, although small herbal shops continued to exist, particularly in the north of England. In 1864 the National Institute of Medical Herbalists, was founded to improve standards, although old-style unqualified herbalists continued to practise.

One of the most well known practitioners in Newcastle certainly wasn’t qualified. We might well consider him a ‘quack’ but his name will be familiar to anyone who lived in Newcastle before the mid 1980s. He’s George Handyside, who was born in Newton on the Moor, Northumberland in 1821. He started out as a shoe manufacturer and retailer in Berwick upon Tweed but soon had over 50 shops across north east England. By 1855, he had moved to Elswick in Newcastle and started to invest in property and, in 1888, he began a new business, as a ‘maker and vendor of medicinal cures’.

Handyside’s most famous product was a ‘cure‘ for consumption but he also advertised ‘Blood Food’, ‘Blood Purifier’, ‘Blood Medicine’ and ‘Nerve Restorer’ (said to cure all appetite for alcohol), amongst other things. He’d hit on another successful business idea in the days before the NHS when, not only did conventional medicine not offer treatments for many common conditions, but also treatment by a doctor was beyond the means of many people.

George Handyside himself lived a long life. He died on 6 May 1904. His funeral was a huge affair with more than 1,000 mourners, mainly poorer people who believed they had benefitted from his medicines, along with those who remembered him as kindly neighbour. His biggest property development yet, an arcade on Percy Street, was still incomplete. It was finished after his death and named the ‘Handyside Arcade’.

But Handyside was by no means the only herbalist operating in Newcastle during the 19th Century. Ward’s Directory of 1857-58, for example, lists six including a J Thomas (hopefully not wholly appropriately) ‘agent to Dr Coffin’ and James Wood, (‘dealer in British and Importer of Foreign Herbs, Barks, Roots etc‘).

In 1865, there were still six including James Wood still and now also Austin’s of Low Bridge, who promoted his ‘celebrated camomile, stomachic and aperient pills…’ .

By 1900, Newcastle had expanded considerably and there were two herbalists on Shields Road: German, John James Reinecke, at 113 and Miss E Halsey at 42 Shields Road West. It is now that George Kingdon is first recorded in Newcastle. He ran Newcastle Herbal Medicine Stores at 110 New Bridge Street.

On 14 May 1901 George Kingdon appeared before Newcastle Police Court on a charge of keeping a refreshment house without a licence. Under the Refreshment House Act of 1860, refreshment houses were  defined as ‘all houses, rooms, shops or buildings kept open for public refreshment, resort and entertainment between 10pm and 5am not being licensed for the sale of beer, cider, wine or spirits’. The act required the keeper of a refreshment house that was open at any time between 10pm and 5am to apply for a licence. The Act was a way of monitoring establishments kept open at night for the sale of food or drink and ensuring that they weren’t operating as public houses, off licences, brothels etc.

In court, Police Sergeant Bestwick reported that he had entered Mr Kingdon’s premises in New Bridge Street at 12.10am on 3 March and bought a bottle of ‘botanic beer’ for which he paid a penny. Kingdon’s lawyer, Mr Parsons, drew the court’s attention to notices in the window of the shop which stated that tonics were sold, including one that read ‘Sarsaparilla, the great blood purifier’. When the prosecution asked Sergeant Bestwick whether the drink had a medicinal act, he replied that he’d only drunk half a bottle. The defence said ‘That wasn’t enough’.

When asked why the establishment was open at that hour, Mr Parsons said that it was not a refreshment house as covered by the act and that his client practised as a medical herbalist, selling spectacles etc, ‘everything that a chemist would sell except the scheduled poisons’. Furthermore he said that Mr Lucock, the Police-court Missionary, called regularly for a drink, believing that it did him good to which the Clerk of Court retorted ‘One needs a pick-me-up after leaving here!’

The role of the Court Missionary is interesting. It originated in London, funded by the Church of England, and was intended to steer criminals away from drink. Within a few years,  the idea had been adopted by more towns and cities and is acknowledged as the fore-runner of the probation service. Mention of the court missionary in this case appears to confirm the connections known to exist between herbalists and the temperance movement.

Despite the defence’s case, the bench’s decision was that the house was a place of refreshment under the Act and Kingdon was fined ten shillings plus costs.

George Kingdon was born in Cardiff in c1866 but his early life remains  a mystery. What we do know is that by 1900 he’d moved to Newcastle and by the following year, he was described in the census as a ‘herbalist shopkeeper’ living with his wife Florence, who originated in Islington, London, at 32 Shields Road West, with a boarder called James Fielding Mattinson, aged 78, from Leeds, who was described as a ‘herbalist’s assistant’. Kingdon’s shop was downstairs at number 34. He no longer seemed to run a shop in New Bridge Street.

By 1911, George and Florence had a six year old daughter, Charlotte, and were living at 12 Stannington Avenue, Heaton, along with a domestic servant. George was still described as a ‘herbalist shopkeeper’ and he was still running the Shields Road West shop. From 1914 the couple lived at 2 Warwick Street.

We also know that George was a freemason, first at Lord Collingwood Lodge in Byker (He is mentioned in the ‘Newcastle Journal’ of 2 November 1914 as having donated £18 on behalf of the lodge to support Belgian refugees.) and then at Heaton Lodge. He died on 5 March 1923, leaving £8,183 8s 10d in his will. Florence outlived him. For a short time the Shields Road West shop continued with J W Young the proprietor but after World War 2 it became Oxteby’s Corn Stores and by the late 1960s a pet shop. It’s long since been demolished.

By 1902, there was a herbalist practising in Heaton itself, Alfred Thomas Raper at 34 North View. Alfred was a former cartman from Yorkshire, who lived in Heaton with his wife, Sarah, and their six children before moving his business to County Durham. There was also a new herbalist in New Bridge Street, Alfred Salmon Barnfather’s at number 59.

Ten years later Bartholomew Westgarth, a local man who had previously kept a butcher’s shop at 65 Seventh Avenue and at 53 Chillingham Road and before that was a waterman,  was running a herbal medicine business from his home at 40 Rothbury Terrace. (Incidentally, Bartholomew was married to Elizabeth nee Hepple and on census night 1911, her nephew, John Wilson Hepple, a prominent local artist was staying with them.)

Also at this time Fred William Bernard was operating from 57 Heaton Road, a property well-known to older Heatonians as the ice-cream parlour.

Luckily for us in the early 1930s, F W Bernard published a book ‘The Rational and Natural Treatment of Disease by Medical Herbalism’, in which he promotes his products and gives a little information about himself. There is even a photo.

Fred was born in Bradford in c1882 and by 1911 was married with a seven year old daughter, Doris, and living in Heaton.

In his book, he says that he has been ‘connected with the herbal trade since a boy’ . He relates how some 15 years earlier, he had acquired the well established and previously mentioned New Bridge Street firm of J M Barnfather. He doesn’t mention possessing any specific qualifications or accreditation but asserts that ‘the various herbs, roots and barks stocked by me are gathered by trained botanists at the correct season and are dried and packed and are strictly hygienic conditions‘ and he quotes Taylor’s Chemists, Boots Cash Chemists, Principle Co-operative Stores and others as stockists of ‘Bernard’s Herbal Medicines’. He cites references from as far away as Inverness-shire and New Zealand. 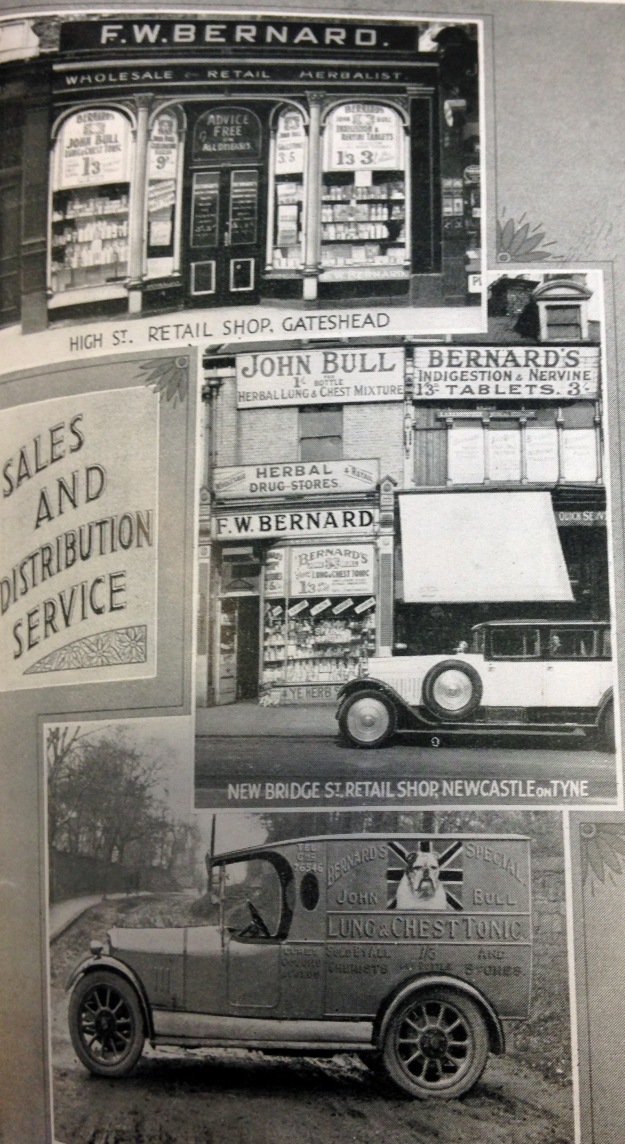 Fred died on 28 June 1941 leaving just over £11,000 in his will, with probate awarded to Second Lieutenant Leon Bernard and Frederick Bernard, herbalist. His knowledge lived on.

Like George Kingdon thirty years earlier, Fred sold sarsaparilla (the roots of ‘smilax officianalis’, a perennial, trailing vine, native to Mexico and Central America.) as a ‘blood purifier’. His ‘finest Jamaica sarsaparilla’ cost 1s 6d per packer and was recommended for children and adults ‘for at least eight weeks every spring time’.

Thank you to G Baldwin & Co, still going strong on Walworth Road, London for permission to use this image

Sarsaparilla,  celebrated in the lyric in ‘Calamity Jane’: ‘Introducing Henry Miller, Just as busy as a fizzy sasparilla’  is still used as an ingredient in both herbal medicine and soft drinks. The sarsaparilla drinks you can buy today are mainly flavoured artificially but some, like those of Baldwin & Co, use a small amount of root extract.

With the advent of the National Health Service, the popularity of herbal medicine declined but it never fell out of favour completely and in Britain, and indeed Newcastle, was boosted by increased immigration from China and by a gradual realisation that conventional medicine didn’t have all the answers. And now increasingly universities, including Newcastle, and pharmaceutical companies are employing cutting edge scientific techniques to work out how to extract valuable plant compounds for use in mainstream medicine.

And you only need to call into Boots on Chillingham Road or any of our chemists and supermarkets to see how popular herbal remedies still are. Heaton’s George Kingdon, Fred Bernard and co might not have had formal medical qualifications but they knew a winner when they saw one.

If you have information, anecdotes or photographs of anybody mentioned in this article or herbalism in Heaton that you are willing to share, please either write direct to this page by clicking on the link immediately below the article title, or email chris.jackson@heatonhistorygroup.org

‘The Rational and Natural Treatment of Disease by Medical Herbalism’ by F W Bernard; 1932.