If you’re a stickler for cleanliness (or a local historian), you might well know that Domestos originated in Newcastle. You might even remember the factory in the Ouseburn, where it was bottled until the then owners, Lever Brothers, moved production to Warrington in 1973. But perhaps you don’t know that its story began in a Heaton garden shed.

Wilfred (sometimes spelt Wilfrid) Augustine Handley was actually born in Essex in 1901 but his parents were both from co Durham and his older sister, Catherine, had been born in Heaton in 1893. By the time his younger sister, Doris Ruby, came along in 1905, the family (father George William, an insurance agent, mother, Dorothy Ann Elizabeth Jane, and older siblings, Robert William, Ruth Primrose , George Ingram Pope and Catherine Violet Beatrice, as well as young Wilfred) had returned to the north east. By 1911, they were living in Gateshead. Father, George, was no longer in insurance. He now worked as a ship’s blacksmith.

It’s something of a surprise then to move forward a decade or so and find trade directories listing both Wilfred and his father as dentists. This was around the time (1922) when the right to call yourself a dentist became regulated for the first time in the UK. Certainly there are sources which give Wilfred’s profession as ‘dental mechanic’ rather than ‘dentist‘. At the moment we can’t be sure but Wilfred’s younger brother, Cecil, followed in their footsteps and, like them, practised from the family home at 309 Chillingham Road for many years.

An article in the Evening Chronicle on 1 November 1945 states that ‘the Joint War Committee of Dental Associations announces that Captain C Handley, having been released from service of the Army Dental Corps is resuming practice at 309 Chillingham Road, Heaton on 5 November 1945’.

Directories list him as a graduate of Kings College University of Durham School of Dental Sciences, which was based in Newcastle. Some local people may remember him: his practice was at the same address on Chillingham Road until the late 1960s. He died at Heddon on the Wall in 1989.

Electoral registers show that Wilfred himself resided at 309 Chillingham Road from at least 1922 to 1934 (with the exception of 1932, when they show him living with his sister Catherine and her husband in nearby Portland Road, then part of Heaton ward). In 1935, he was at 152 Simonside Terrace.

But it was while living at 309 Chillingham Road that the entrepreneurial Wilfred had his big idea. According to Unilever, which still produces it, Wilfred was a 25 year old dental mechanic when he started to dilute and bottle sodium hypochlorite,  a waste product bought from the chemical works, ICI Billingham, in the family’s garden shed. We can only guess that originally he was using the compound to whiten dentures (or even teeth?) but saw its wider potential.

In fact, bleach had been around since the eighteenth century when Claude Louis Berthollet produced potassium hypochlorite in his laboratory on the Quai de Javel in Paris. Hence it became known as ‘Eau de Javel‘. A hundred or so years later, in the late nineteenth century, an E S Smith patented the chloralkali process of producing sodium hypochlorite, which then started to be sold as a bleach under a number of brand names.

So Wilfred didn’t invent bleach but what he seems to have got right from the beginning was the marketing and distribution of his product. He set up the Hygiene Disinfectant Company and, according to Unilever, in 1929, chose the brand name ‘Domestos’, from the Latin ‘domus’ meaning house and the Greek ‘osteon’ meaning bone, suggesting ‘backbone of the home’.

The Handley family tells it a little differently: Wilfred asked his mother what his product should be called. When she enquired what it was for and he replied, ‘Domestic use,‘ the name ‘Domestos’ suggested itself.

At first, Domestos was marketed to local housewives and sold in large brown earthenware jars. 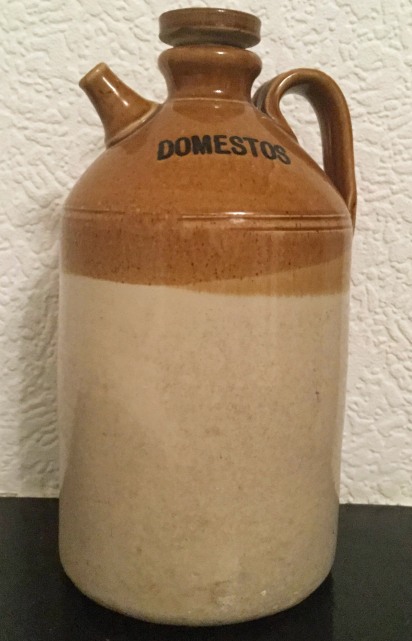 Perhaps inspired by the success of Ringtons Tea, established in Heaton in 1907, Handley set up a system of home delivery. (Interestingly, the 1939 Register shows Robert E Sturdy, Sam Smith’s trusted sales manager at Ringtons, who we have written about previously, living next door to Cecil in the Handley family home on Chillingham Road). The jars were refilled by door to door salesmen pushing hand carts or riding bicycle carts. The photograph below was supplied by descendants but we don’t know whether it’s Wilfred himself in the picture. It’s certainly a very early picture of door to door Domestos sales, when the Hygiene Disinfectant Company would have been very small.

Sales were buoyant enough for production to move to a small factory on the Quayside in 1932 and to expand into a wide range of polishes, disinfectants, shampoos and detergents. By 1933, goods were being shipped south to Hull by sea and, within two years, supply depots had opened in both Hull and Middlesbrough.

In 1936, Wilfred married Ivy Isabella Cissie Halliday, the daughter of a Gateshead publican, who was herself born in Walker. She was a typist with the Post Office in Newcastle. The same year the company was renamed ‘Domestos’ after its original and most successful line. Records show the subscribers or directors as both Wilfred and Ivy.

In 1938, the company acquired larger premises, the College Works, a former toffee factory on Albion Row, Byker. By now, Domestos was sold in brown glass bottles with specially designed caps that allowed gas to escape. The cost of a bottle in 1938 was 6d with a 1d returnable deposit on the bottle.

After the war, the company was unable to acquire enough delivery vehicles so, again like Ringtons before them, it bought the St Ann’s Works at Heaton Junction and set up its own coach building division. This was soon renamed Modern Coachcraft Limited and by 1965 had a van sales force of over 150 salesmen.

The bleach wasn’t only promoted as a cleaning agent and to ‘sweeten’ drains. It was also used as a cure for sore feet and, during the war, a treatment for burns. By 1952 there was national distribution with offices in London, Manchester, Cardiff, York and Glasgow and a national research laboratory.

Stergene (launched in 1948 and specially designed for washing woollens) and Sqezy (launched in 1957, the first washing up liquid to come in a squeezable plastic bottle) were other well known products developed by Handley and his staff. But there were specialist brands too – a variant of Stergene, called Hytox was used in hospitals and garages. And it was now that the slogan ‘Domestos kills all known germs’ was first coined.

In 1961, Wilfred sold the brand to Lever Brothers Ltd. The 33 years of success and eventual sale of the company meant that Wilfred found himself a wealthy man. In 1963, he established a charitable foundation, the W A Handley Charity Trust, with a large donation. The charity is still in existence today and gives money to good causes throughout the North East and Cumbria. The charity says that it tries to follow the wishes of its founder and support those who are disadvantaged, young, elderly or disabled; maritime and service causes; education, training and employment; communities; historic and religious buildings, the environment, music and the arts.

In the financial year 2015-16, the 100 plus beneficiaries included: Percy Hedley Association, St Oswald’s Hospice, the Lit and Phil, Northern Sinfonia, Shelter, Northumberland Wildlife Trust, Bede’s World and Newcastle Cathedral.  Whatever your interests, if you live in the north east, you have good reason to be grateful to Wilfred Handley.

After the sale to Lever Brothers (now Unilever), Newcastle at first continued to be the centre of production. There were by now 800 workers on the College Works site and a £100,000 four storey office building was commissioned. Nevertheless a  number of production lines, though not those of Domestos itself, were soon moved to Port Sunlight and Warrington.

In the 1970s, the bleach itself went from strength to strength (so to speak). It became thicker, the familiar blue plastic bottle was introduced and perfume was added for the first time. But in 1973, production was moved from Newcastle to Warrington ending Domestos’s long association with Newcastle. This must have greatly saddened Wilfred, who died in Low Fell on 8 May 1975.

Domestos Factory, Albion Row in the 1970s (Thank you to Ouseburn Trust for permission to use)

However, the product first developed in a Heaton garden shed by the young dental mechanic, Wilfred Handley,  lives on. It is now sold in 35 countries right across the world. Think about that, as well as the many local good causes it has supported, while you’re whitening your dentures!

This article was researched and written by Chris Jackson, Heaton History Group.

‘The Development of Domestos: a product of the Ouseburn valley’ / Michael Byrne in ‘Tyne and Tweed’ no 58, 2004 (Association of Northumberland Local History Societies)

If you know more about Wilfred Handley and the early history of Domestos or anybody mentioned in this article or if you have any photos you are willing to share, please get in touch, either by clicking on the link immediately below this article title or by emailing chris.jackson@heatonhistorygroup.org

And if you have any memories or photos of work in the Domestos factory in Ouseburn please contact Lesley Turner at the Ouseburn Trust on 0191 261 6596 or by email at lesley.turner@ouseburntrust.org.uk

We are always interested to receive information, memories and photos relevant to Heaton’s history.