In 1898 there seem to have been just two (unnumbered and unnamed) houses on Heaton Road north of Heaton Baptist Church (apart, that is, from the separately listed Jesmond Vale Terrace): one was occupied by John Henry Brown, a cycle manufacturer, and the other by a builder named John Wilson.

But two years later this part of Heaton Road looked very different. Building in the neighbourhood had continued apace and progressed northwards onto what had until very recently been farmland and the same John Wilson is listed in the trade directories as the first resident of 200 Heaton Road, the southernmost address in the block between Meldon Terrace and King John Street, the shop which, in 2013, is The Butterfly Cabinet cafe.

Originally though, as you can see from the photograph below, the block was primarily residential. John’s immediate neighbours were J Davidson, a tinsmith, and A W Penny, a ‘gentleman ‘. John himself though is more difficult to fathom. He had been born in Milton, Cumberland (not far from Brampton on the Newcastle – Carlisle Railway) and was by this time 45 years old. He was married to Elizabeth, a Scot. There were no children living with them in 1901 but the couple was affluent enough to employ a live-in housemaid and kitchen maid.

John had lived in Heaton for a good few years by this time. In 1887, he was already described as a builder with an office address in Heaton Park Road. By 1892, he was still a builder, living in Heaton Grove.

But in the early 1900s, although his primary occupation is still given as a builder, he’s also described as a wine and spirit merchant and it’s clear from directories, newspaper reports of brewster sessions and the photograph below that in the early days, an off licence operated at number 200, together with the adjoining 1 and 3 King John Street and that John Wilson owned the business premises and lived above or next to the shop. It’s called the Falmouth Hotel in unsuccessful applications for a ‘full’ licence to sell alcohol in 1899 and in this photograph but that name doesn’t appear in the trade directories. 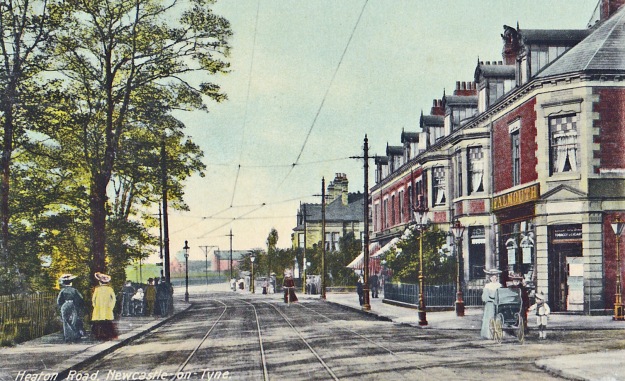 The building itself is interesting. Visitors to the Butterfly Cabinet will testify that it’s a fair size. It incorporates what were originally numbers 1 and 3 King John Street and there have been various alterations over the years both to turn the three houses into one address or convert them back into separate flats.

The business lives on

John Wilson only lived and operated a business on Heaton Road for a couple of years. By 1903, a Thomas Blackett had succeeded him. Thomas had been born and bred locally. In 1887, he ran a stationer’s shop at 117 Shields Road. In his early forties, he was living at 31 North View and his shop had moved to 73 Shields Road. By 1895, he was still running the same shop although he had moved house again to 6 Guildford Place. But by 1901, his line of business had changed completely. Thomas was now a wine and spirit manufacturer and, as well as the now converted shop on Shields Road, he had shops in Heaton Hall Road (21), Jesmond, Sandyford and the west end. He was living at 23 Heaton Hall Road with his wife, Jane, six sons and daughters and a servant. Thomas Blackett died in 1912, leaving what was a fair sized estate of almost £15,000. The business he has built up lived on though. 200 Heaton Road didn’t change hands for another 20 years.

In the early 1930s, new flats were created at 200A and B and the shop became a confectioner’s, called firstly Burton’s and then Steel’s. Steel’s survived through the Second World War although, possibly in response to sugar rationing, by the end of the war it had been turned into a baker’s, part of a small chain which also had shops in Jesmond and Sandyford. Some older residents might even remember it?

In 1950 the shop changed character again. John Bradburn, originally from Ipswich, had started a business in the centre of Newcastle way back in 1831. At that time, he described himself as a ‘velvet, silk and woollen dyer’. By 1881, when he was 71 years old, he employed 6 men, 5 boys and 7 women. He died in 1890 but, as with Blackett’s, his business continued to thrive and 60 years later it expanded into Heaton. By this time, the firm was described as ‘dyers and cleaners’ and had branches in the west end and in Gosforth. Later a shop was opened at 265 Chillingham Road. The company’s office was at 55 Shields Road. In the early 1970s, however, after 140 years, the company seems to have closed completely.

Here the trail goes cold until recent years when first Belle and Herb and then The Butterfly Cabinet made the corner of Heaton Road and King John Street one of Heaton’s favourite haunts. Can you help us fill the gaps in our knowledge ? If you have any information, memories or photographs of 200 Heaton Road, please get in touch. You can either post a comment above this article: click on ‘Leave a reply’ just below the title. Or alternatively, email Chris Jackson.

Heaton’s place in history is bound up with railways so we thought we’d chug along its stations’ timeline to see what we could find. The original Heaton Station was on the first railway to pass this way – the line from Newcastle to North Shields and later Tynemouth, which opened on 18 June 1839. The station was situated just to the North East of what later became called Heaton Road. The precise construction date is a little uncertain but there are press adverts which mention trains stopping at a station at ‘Heaton Hall Lane’ as early as 1841.

The first mention we have so far found in news reports dates from 1844 when a passenger walking home from the station after dark fell from the bank by the lead factory into the Ouseburn. By the mid 1840s, there were already plans for a new line to Berwick, which meant that Heaton was destined to become an important junction. The stretch from Heaton to Berwick opened on 29 March 1847. This illustation dates from that time. Thank you to Alan Morgan in whose book ‘Heaton: from farms to foundries’ it appears. 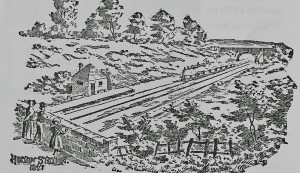 Drawing of the original Heaton Station, 1847

Here is a selection of news stories featuring Heaton Station in its early years.

On Friday 28 September 1849,  Queen Victoria travelled down the new east coast line on her return from holiday in Balmoral. A public holiday was declared in Newcastle and although the weather was inclement,  the crowds were undeterred:

‘Heaton Station was the point at which her majesty entered the borough of Newcastle, and here was a profuse display of flags and ornamental devices in flowers and evergreens.’

‘Commencing at Heaton Station a long and dense crowd lined the railway to the Ouseburn Bridge and even the hills some distance from the line were covered with spectators.‘

While she was here, she opened the new High Level Bridge. This picture of the royal train that day is from the Illustrated London News. 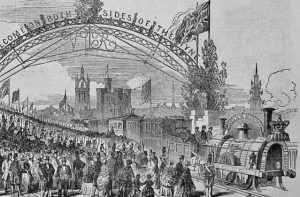 In August the following year, there was another local public holiday when the queen and her family again passed through Heaton, this time after after stopping in Newcastle to open the new Central Station on their journey North.

In 1861 advertisements inviting tenders to build a new station and station master’s house at Heaton appeared in the press. This would explain why the next photograph, dated 1886, looks quite different from the much earlier drawing.

This photograph is published by kind permission of Beamish Museum and John Moreels of Photo Memories.

Then on 6 November 1886, when the track was also widened, The Newcastle Courant announced that work had begun on a completely new station which

‘is situated to the west of the present one. … bridge building will be necessary as the platform will be intersected by lines of rails. These works are giving work to a large number of men, and as a large amount of house-building is going on in the locality, that part of the town presents quite a brisk appearance.’

On 1 April 1887, the old station closed and on the same day the new one opened on on North View on the opposite side of Heaton Road. Again the photograph below is published with the permission of Beamish Museum and John Moreels of Photo Memories.

Moving into the twentieth century, an incident took place which brought Heaton Station to the attention of the whole country. On 18 March 1910, John Innes Nisbet, a colliery employee who lived in Heaton, boarded the 10.27am train at Central Station to deliver wages to Widdrington Colliery. When the train arrived at Morpeth, Nisbet’s dead body was found. He had five bullet wounds to the head.

A key witness was Nisbet’s wife, who had gone to Heaton Station to talk to her husband while the train was stopped there. She claimed that she saw the man later identified as John Dickman, the alleged murdererer, sitting in the same carriage as her husband. Dickman, who had also previously lived in Heaton, was found guilty on what many people believed to be unsubstantiated circumstantial evidence. He was hanged but long afterwards the case was cited by opponents of the death penalty.

On 17 October 1913, suffragettes were reported to have attempted to burn down Heaton Station. According to contemporary press coverage, one of the porters had smelled burning: he saw smoke coming from the direction of the ladies’ waiting room and upon investigation found a large cardboard box behind one of the lavatory doors. It contained open tins of oil, fire-lighters soaked in oil and a piece of candle. It had been positioned in such away that, once alight, it would ignite the contents of the box and then the door. Had it not been discovered, the station may well have been destroyed as it was constructed almost entirely of wood. A few weeks previously Kenton Station had been burned to the ground and earlier that year, a bowls pavilion in Heaton Park destroyed. All three incidents were thought to have been perpetrated by suffragettes, who at this time were accelerating their campaign for womens’ right to vote.

That takes us to 100 years ago. Heaton Station finally closed on 11 August 1980 in preparation for the extension of the Metro system. The following photographs are reporduced by kind permission of Alan Young, railway photographer and author, who was brought up on Meldon Terrace. They date from 1972. 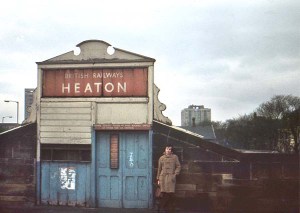 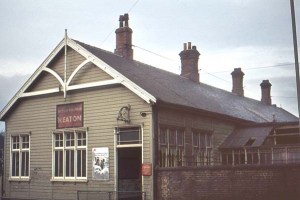 Further information and more images can be found at the Disused Stations website.

Can you help?
If you have information, memories or photographs of Heaton Station or Heaton’s railways, please get in touch.