When you look at 57 Heaton Road now, it’s difficult to see any trace of the thriving ice cream parlour that operated here from the 1950s until at least the late 1980s. It is now a residential property, the upper bay window has gone, as well as all of the shopfront. Not a ghost remains of the huge ice-cream cone that once stood in the window!

But let’s rewind for a moment. The first occupants of number 57 in around 1893 were Thomas and Mary Jane Musgrave. Thomas was described in the trade directory of that year as a ‘gentleman’. He was a lawyer and land agent from Cumberland and his wife the daughter of a County Durham farmer. The fact that the house was occupied by a couple of such social standing illustrates how ‘respectable’ this part of Heaton Road was during the late nineteenth and early twentieth century. The Musgraves were resident for over ten years.

Next, in around 1905, William Dawson and his family of seven children moved there from Balmoral Terrace. William, who originated from Whitby, was a draper but, although the family continued to live locally, their Heaton Road business was short-lived: by 1911, William was described as a travelling draper and they were living on Heaton Grove.

The occupants from 1910 were Fred and Ethel Bernard and family. Fred was at this time described as a herbalist and much later, in the mid thirties, as a botanist operating from premises in New Bridge Street. He died in 1941. It may be that his Heaton business was curtailed due to World War 1.

After the war, Ernest Gibbon briefly ran a dental practice from the premises and then the shop seems to have been unoccupied for a while until, in about 1935, another draper’s shop run by Mrs Anne Rosetta Chambers opened. By the end of the war, the shop was empty again but it wasn’t long before the start up of the most enduring of all the businesses to occupy 57 Heaton Road. 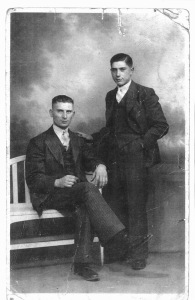 Antonio (‘Tony’) Gazzilli , listed with Maria as the proprietor of 57, pictured with younger brother Thomas (‘Tommy’)

In 1948-49 the Town and Country Directories listed only one ice cream manufacturer in Newcastle, Mark Tony (or Antonio Marcantonio) of Stepney Bank. The first record of Heaton Ice Cream Parlour is in Kelly’s Directory 1950, under the name of Mrs M Gazell (almost certainly a misprint for Gazzilli). In the photo below (reproduced here courtesy of Beamish Museum), taken on 30th June 1950, just after it opened, the ice cream parlour is the building with the rather splendid car in front of it. Peter Darling, gents’ hairdresser’s was next door and the Co-op Pharmacy was on the corner.

Maria and Frank Gazzilli’s youngest daughter Theresa and youngest son, Franky, outside no 57.

It is difficult to pinpoint exactly when the Heaton Road Ice Cream Parlour closed. The 1994 telephone directory lists a T Gazzilli living in Gateshead and a C Gazzilli at 57 Heaton Road 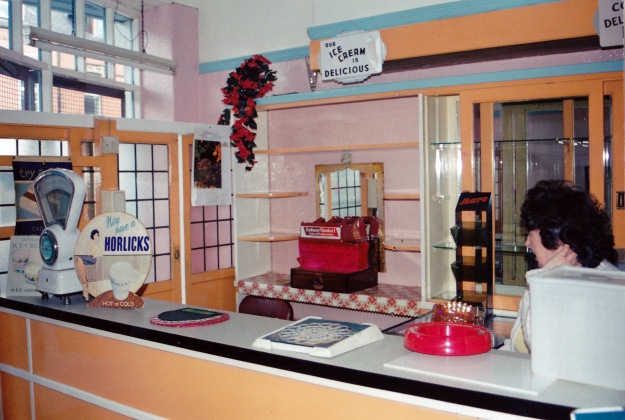 Chrissie Gazzilli pictured in the shop when it closed in 1990

although it is likely that the parlour had closed before then. The photographs below were taken in its final years by Davey Pearson, a local photographer, whose archive is held by the Ouseburn Trust.

A gravestone in Garden House Cemetery, Swalwell commemorates two brothers: Thomas Gazzilli b1920 d 2003 and Anthony (Tony) Gazzilli b1915 d2010. The fact that there was a Gateshead business makes it seem very likely that these were our “Gazzilli Bros” and that they both lived to a ripe old age.

Meanwhile, the wheel has turned full circle. Number 57 has returned to residential usage. It is the (ice?) cream coloured building in the photo below, now minus its bay windows and looking quite different from when it was the local landmark that’s still remembered with such affection.

Did you enjoy Gazzilli’s ice cream, do you know any more about the family or recall what came next? More information, photos or memories would be very welcome. A few older readers may even remember the draper’s shop that preceded it. Please comment above this article. Click on Leave a Reply below the title or email Chris Jackson (chris.jackson@heatonhistorygroup.org).

Terri, a  granddaughter of the late Maria and Frank Gazzilli, has been in touch from Sydney, Australia. She has kindly sent photos of the family and the shop, some of which have been inserted into this article. A precis of the information she provided has been added to the Comments section of this article (See below or click on the link immediately below the article heading). It clears up our confusion about the identity of and relationship between the various Gazzillis.