Our May talk will elicit fond memories for many. In his richly illustrated and entertaining talk, featuring historic images and his own photographs, retail consultant Graham Soult will tell the story of Woolworths through its buildings. 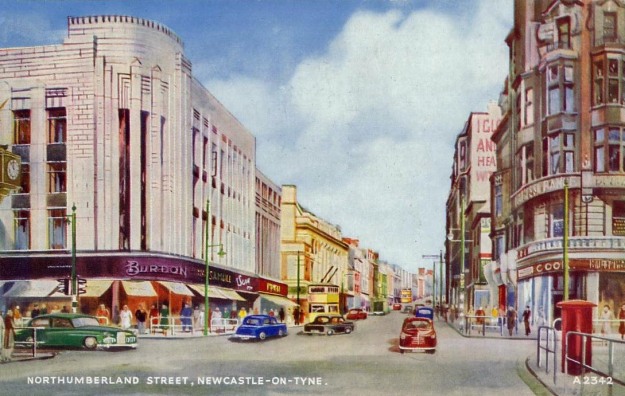 Can you spot Woolworths on the left?

Starting with the retailer’s UK launch in 1909, he will take us through all the highs and lows, including its first stores in the North East, its spectacular growth from the 1920s to the 1960s, and its subsequent decline and closure. Having visited and photographed all the former Woolworths stores in the North East, Graham’s talk ends with a reveal of what they have all now become.

You may have seen an appeal on BBC’s ‘Look North’ recently and from Peter Dillon at our last talk for anyone with Parsons’ works connections to look out objects from any of the Heaton works as well as photos and stories or memories.

An exhibition is being planned in Birr, Ireland (where Charles Parsons was born and grew up) to commemorate 130 years since the Heaton works were opened and the organisers are looking for help from Heaton. Ruth Baldasera from Siemens says:

‘Did you, or one of your relatives work at C A Parsons or Parsons Marine or Grubb Parsons? Do you know anyone who knew a member of the Parsons family and do you have any anecdotes? Do you have any photographs, documents, brochures, newspaper cuttings or letters? Were you awarded with any objects at retirement perhaps which you are now happy to part with? Was there anything you made for an ornament, a bespoke item perhaps that contains part of a Parsons machine?

Anything about the restoration of Turbinia

In particular we are desperately seeking a photo of Sir Charles son Algernon George, and the icing on the cake would be to find his war medals.

John Percival Forster was born on 12 April 1888, the son of  Londoner, John Forster, who had moved to Newcastle as a young boy and later married Elizabeth Best, a Geordie girl. John Percival (known as Percy) their first child, was born in the west end but soon the family moved to Heaton. In 1901, they were living at 62 Heaton Road and, by 1911, at  37 Heaton Grove, opposite the railway line. 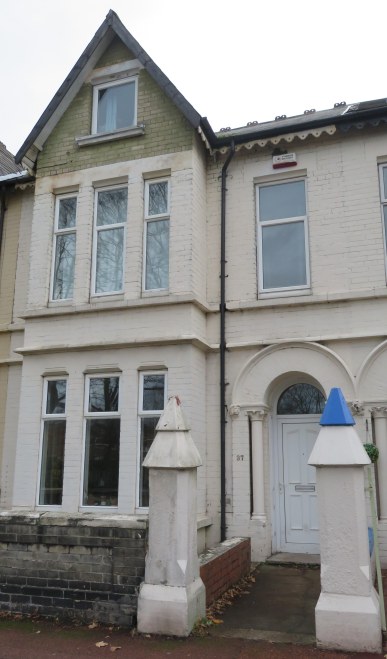 By this time both Percy and his younger brother, Stanley, were working as assistant mercers (ie they were dealers in silk, velvet and other fine fabrics) in their father’s firm on Grainger Street. 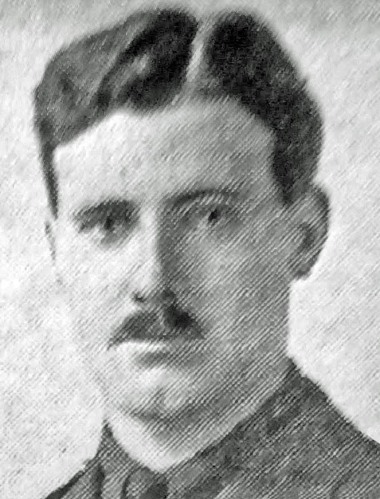 The family were churchgoers and worshipped at St Gabriel’s on Heaton Road. Percy had attended Rutherford College and had learned to play the organ.  He became the organist at St Paul’s Church in Whitley Bay and assistant organist at St Andrew’s Church in Newgate Street.

The Forster family were politically active and belonged to the Primrose League (apparently named after the favourite flower of Benjamin Disraeli). Founded in 1883, its aim was to promote Conservative principles. By 1910 there were over 2 million members, organised into 2645 local groups or ‘habitations’. Percy and his brother, Stanley, were secretaries of their local habitation. They attended political and social events, such as whist drives and dances, held in places such as the Assembly Rooms in Heaton. Their sister, May, also took part in these events, as well as being a member of a theatre group associated with the local habitation. The Primrose League closed only  in December 2004, after 121 years, with the £70,000 in its coffers transferring to the Conservative party.

At the outbreak of war, Percy joined the Northumberland Fusiliers (Tyneside Scottish) on a temporary commission. He was given a reference by Mr Gaunt, his headmaster at Rutherford College, who vouched for Percy, saying he had ‘attained a good standard of education’. The Reverend Robert Trotter, vicar of St Gabriel’s, in another reference, said that Percy had been of ‘good moral character’ in the 12 years that he had known him.

It was reported in the ‘Nottingham Evening Post’ on Saturday 7 August 1915, that Miss Sybil Margaret Round had married Captain John Percival Forster at All Saints Church, Nottingham that afternoon in the presence of a large congregation. The officiating clergymen were the bride’s father, Rev W Round, vicar of St Peter’s in Radford, assisted by Rev C R Round and Rev H Lowell Clarke, vicar of All Saints. On leaving  the church the bride and groom walked through an archway of swords, formed by officers of the 3rd Line Unit of the Robin Hood’s, of which the Rev W Round was acting chaplain.

There were two bridesmaids, one of whom was May Forster, Percy’s sister. The best man was Heaton’s Captain Henry Sibbit, soon to be promoted to Major Henry Sibbit. Percy’s new brother in law was William Haldane Round, soon to become a captain in the 7th (Robin Hood’s) Battalion of the Sherwood Foresters.

Battle of the Somme

Less than a year later on 1 July 1916, the first day of at the Battle of the Somme, Percy Forster was killed in battle, aged only 28. His death was confirmed by two comrades:

Private R Roxburgh, 22nd Northumberland Fusiliers, said ‘On 1 July near La Boiselle close to the German second line of trenches I saw Captain Forster killed. I was wounded a yard from him and lay for five hours beside him. I was his signaller.’

Corporal W Willis stated that he was killed just beyond the German second line between La Boiselle and Fricourt. ‘I saw him dead but I do not know how he was killed.’ Second Lieutenant Purdey also saw him dead.

Percy’s father was only informed unofficially, so he wrote to the War Office to say that he had not been officially told of his son’s death and so did not want to believe he had been killed. A gold ring, a writing case, a leather case containing photos and two badges and a leather case containing photographs were returned to Sybil, Percy’s wife. However, his father had difficulty obtaining the death certificate needed to obtain probate and wind up Percy’s financial affairs. There were also several letters to the War Office requesting that his war pension be approved so that Sybil, could manage financially.

On the very same day that Percy lost his life, 1 July 1916, his new brother in law, Captain William Haldane Round also died on the Somme. as did Percy’s best man, Major Henry Sibbit of 21 Rothbury Terrace, formerly of Chillingham Road School and a fellow parishioner of St Gabriel’s, who had been Percy’s close friend in Heaton.

Percy’s brother, however, Stanley McKenzie Forster served in the navy and survived the war. 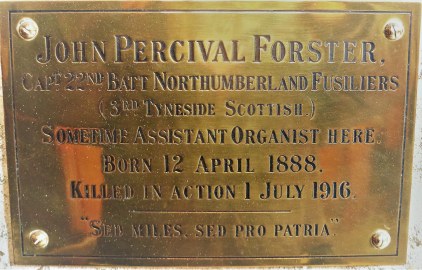 Percy Forster and Henry Sibbit of Heaton remembered together at Thiepval

If you know more about Percy Forster or his family or have photographs or anecdotes you’d like to share, we’d love to hear from you. You can contact us either through this website by clicking on the link immediately below the article title or by emailing chris.jackson@heatonhistorygroup.org

Our talk in June will feature on of the BBC’s recent twentieth century ‘Icons‘. Born in Washington, Durham, Gertrude Bell was an adventurer, archaeologist, cartographer, historian, linguist, mountaineer, traveller and writer.

During the First World War, she became an Intelligence Officer and after the War played a major role in creating the modern Middle East. She was as vital to the history of that region as her friend and colleague, Lawrence of Arabia. It is interesting to note that the political and religious problems that Gertrude faced in the Middle East have changed very little in almost 100 years.

Anthony Atkinson was born in Gateshead, attended St Cuthbert’s Grammar School, Newcastle and studied Economics at Clare College, Cambridge. He qualified as a chartered accountant and held various positions as financial director in industry before undertaking a management buyout acquiring 32 retail shops from Vaux Group Plc. After selling the business, Anthony reverted to his ‘first love’ of history. He is now a Newcastle City Guide, a volunteer for Friends of The Laing Art Gallery and also a volunteer guide at the Lit & Phil. This is one of his portfolio of ten talks.