‘Her funeral was the most remarkable ever seen on —‘

‘[The] obsequies were celebrated with great splendour and solemnity. Several thousand  Catholics were at her residence on the day of her death. A great banquet was provided by her son for all the neighbouring gentry and the poor received bountiful largesses of meat and money… ‘

‘Her body was transported on a barge surrounded by twenty other barges. The streets were lined  with lit tapers.’

‘At – the magistrates and alderman with the whole glory of the town, attended at the landing place to wait on the coffin before the interment at -.’

Not Mary Tudor, England’s Catholic queen – her burial was a MUCH more subdued affair – but even if we tell you that the words represented by dashes are ‘Tyneside’, ‘Newcastle’ and ‘All Saints’, you might struggle to come up with an educated guess. This is the story of a woman often referred to (if she’s spoken of at all)  as ‘Dorothy of Heaton’.

Dorothy Constable was born around 1580 probably at the home of her maternal grandfather at Wing in Buckinghamshire, (The estate is now a National Trust property) although her parents’ own home was Burton Constable in East Yorkshire, also now open to the public. The Constables were descended from a Norman knight who came to twelfth-century England and acquired an estate at Burton (later Burton Constable) by marriage. By the 16th century the estate comprised over 90,000 acres.

Dorothy’s father was Sir Henry Constable (1559-1608) who, despite a marriage into a strongly Catholic family, was appointed a Justice of the Peace then Sheriff before serving in Parliament twice for the borough of Hedon, which was surrounded by his estates, and then Knight of the Shire for Yorkshire in 1589. His subsequent career is said to have been hindered by his wife’s religious convictions. 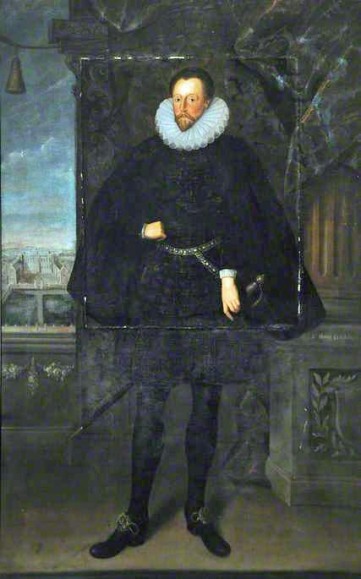 Dorothy’s mother was born Margaret Dormer, daughter of William Dormer of Eythrope, Buckinghamshire and his second wife, Dorothy Catesby. Margaret was described as ‘a beauty in the external, full of majesty, tall in stature, sweet in countenance, fair in complexion’. This is a portrait of her. 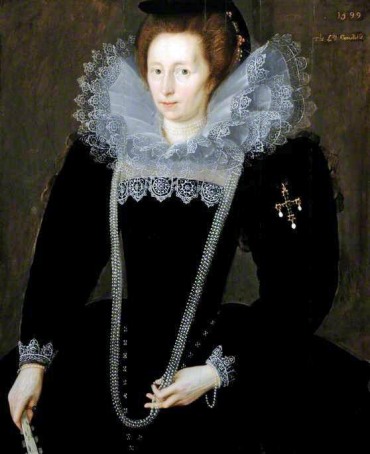 The Dormer family were staunchly Catholic. Persecution of Catholics had begun in the reign of Henry VIII but it was under Elizabeth I that the Recusancy Acts of 1558 became law. The acts imposed various types of punishment, such as fines, property confiscation, and imprisonment on those who did not participate in Anglican religious activity, This was the world into which Dorothy was born in around 1580.

About  200 Catholics are thought to have been executed during Dorothy’s lifetime for refusal to comply with or openly opposing religious restrictions. They  included 7th Earl of Northumberland, 1st Baron Percy, executed in 1572 after leading the 1569 Rising of the North, an unsuccessful attempt by Catholic nobles from Northern England to depose Queen Elizabeth I and replace her with Mary Queen of Scots. But many were executed simply for being ordained or harbouring Catholic priests, an example being Margaret Clitherow, crushed to death in her home town of York in 1586. Indeed, when Dorothy was just twelve years old, her own mother was imprisoned and spent several  further spells in jail.

On 10 March 1597, young Dorothy left Yorkshire to marry Roger Lawson, son of Sir Ralph Lawson of the Manor of Byker and Elizabeth Brough of Brough Hall, near Catterick. Roger’s mother had also been imprisoned for recusancy but then began to conform  as did Roger. However, it appears that Dorothy soon had converted most of the Lawson family, apart from Roger, who remained Anglican until his deathbed.

It seems that Dorothy became increasingly aware of the threat her activities posed to her in-laws and so, while Roger practised the law mainly in London, Dorothy moved with their children away from Brough to Heaton Hall, another property of the Lawson family, described as ‘a convenient house and reasonably good seat’.

Here, Dorothy is said to have arranged for a priest to say mass once a month in the house. This necessitated carrying him in by night and ‘lodging him in a chamber’. She gradually employed Catholic servants and raised her children as Catholics. What we don’t know is whether the still standing King John’s Palace / Camera of Adam of Jesmond was used by Dorothy and her family at this time or was it already a ruin? 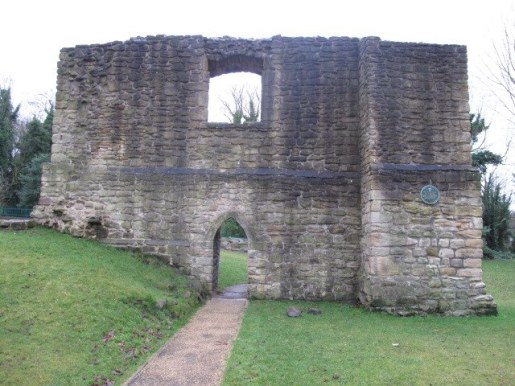 House of Adam of Jesmond, built around 1255

Despite seeming to have lived apart much of the time, the Lawsons had at least fourteen children (Her biographer says 14 but reports the family as giving the number as 19) including: Henry, Dorothy, Elizabeth, Edmund, Catherine, Mary, Ralph, George, Margaret, John, Roger, Thomas, James and Anne.

Dorothy junior, born in Yorkshire in 1600, joined an English Augustinian convent in Louvain as a choir nun. She died there aged only 26.

In 1624, Margaret, born in Heaton Hall in 1607, joined a Benedictine convent in Ghent which had been founded just a year earlier. She became an ‘infirmarian, dean and prioress’ before she died in 1672. The convent was  politically active, supporting both Charles and James Stuart during their exile.

Ralph attended the English College, a seminary in Douai.

We don’t know much detail about the Lawsons’ life in Heaton, except that Roger was rarely here and there is a mention of a ‘visitation of sickness’, which seems to have taken place sometime between her husband Roger’s death in c 1614 and 1623. (There are independent references to outbreaks of coughs, colds and headaches in the north east between 1615 and 1617.)

In 1623, Dorothy moved her household to St Anthony’s near Walker. The name, still used today of course,  derives from the area being dedicated to St Anthony ‘in Catholic times’. A picture of the saint was said to have been placed in a tree near the river for the comfort of seamen. St Anthony’s at this time was apparently an ‘ infinitely more pleasant spot’ than Heaton and had the advantage to her of being more remote but with easy access by boat. There was, however, no house there. Dorothy had to have one built.

In this appropriate spot, the Lawson house became a dedicated refuge for Jesuit priests. Dorothy was said to have spent a lot of time in prayer and also examined local children on their catechism. Not only did she invite her tenants and neighbours to mass and visit other Catholic recusants in jail, seemingly even taking in their washing (although she certainly had servants so maybe this didn’t involve actually getting her hands wet!), she is also said to have tended the sick and the poor, often on horseback. ‘Because she was a widow herself, she kept a purse of tuppences for widows’ and, as a result, was highly thought of in the area. Whether because of her popularity locally or the remoteness of her home, Dorothy was never prosecuted for her religious activities.

But on 26 March 1632, aged 52, after 6 months illness, ‘a languishing consumption or cough of the lungs’, Dorothy died. The following day, according to her biographer, one of her sons invited the local gentry to dinner and, the day after, the poor of the neighbourhood were served with meat and given money. Her body was then carried to her own boat, which ‘accompanied by at least 20 other boats and barges, and above twice as many horse’  sailed towards Newcastle where ‘they found the streets shining with tapers, as light as if it had been noon’.

‘The magistrates and aldermen, with the whole glory of the town, which for state is second only to London, attended at the landing place to wait on the coffin, which they received covered with a fine black velvet cloth and a white satin cross, and carried it to the church door, where with a ceremony of such civility as astonished all (none, out of love for her and fear of them, daring to oppose it), they delivered it to the Catholics…  who… laid it with Catholic ceremonies in the grave….’   (at All Saints Church, an Anglican church). 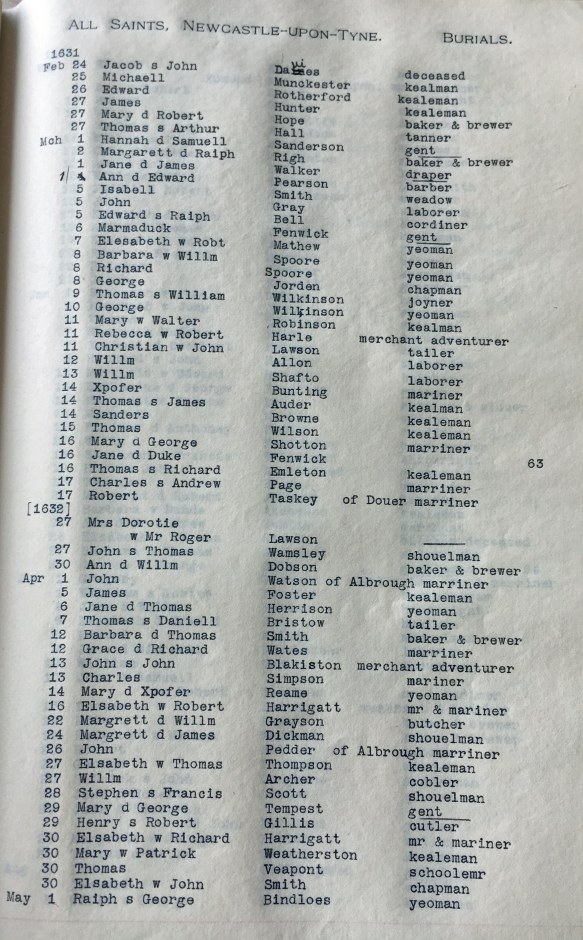 Transcript of burials at All Saints including that of Dorothy Lawson

National politics at this time might have been a factor in the liberal response of the authorities to Dorothy’s burial ceremony. Charles I was now on the throne and, at this point, seemed to be quite tolerant of Catholicism and even accused of being too close to non conformists.

Four years earlier he had prorogued parliament, whereupon MPs held the speaker down in his chair so that the ending of the session could be delayed long enough for resolutions against Catholicism and other matters to be read out and acclaimed by the chamber. Charles responded by dissolving parliament and had nine parliamentary leaders imprisoned over the matter turning them into martyrs. (Certain parallels with today became apparent in the course of this article being finalised!)

The year after Dorothy’s death, however, Charles appointed a new Archbishop of Canterbury and together they initiated a series of reforms aimed at ensuring religious uniformity. The courts once again became feared for their censorship of opposing religious views. There were riots and unrest when Charles attempted to impose his religious policies in Scotland. There were difficult times ahead for both Charles and Catholics.

Naturally, miracles were attributed to Dorothy: her husband was said to have seen her in two places at once (working in the kitchen and at prayer in the bedroom) – though that would presumably have entailed him being in two places at once too! Her music was heard after her death and her rosary beads were said to have restored a sick woman to health.

It’s difficult to know the exact details of Dorothy’s life – and we haven’t yet even found any portraits of her or her husband, Roger Lawson, or illustrations of Heaton Hall or St Anthony’s at this time –  with contemporary impartial writing or even modern research about those with religious convictions not easy to find, but Dorothy seems to have been a strong, capable woman whose bravery at a time of religious persecution not generally considered to have been in doubt. She features prominently in academic works about this period and yet is forgotten in her own neighbourhood. As an early notable one time female resident of Heaton, we believe she deserves to be better known.

If you know more about Dorothy Constable, Roger Lawson or their family especially any contemporary images, we’d love to hear from you. Please either leave a reply on this website by clicking on the link immediately below the article title or email chris.jackson@heatonhistorygroup.org

The Life of Mrs Dorothy Lawson of St Anthony’s near Newcastle upon Tyne / William Palmes; Dolman, 1855.

Who Were the Nuns? a prosopographical study of the English convents in exile 1600-1800 / Queen Mary University of London

Who’s Who of Tudor Women?