On 20 June 2016 (with perfect, even poetic, symmetry, the very day on which this year’s midsummer solstice will fall), actors from the People’s Theatre, Heaton, will take to the stage at Stratford upon Avon for the first time, alongside the Royal Shakespeare Company, in a performance of ‘A Midsummer Night’s Dream’. They will perform an encore the following night.

The troupe has already played the parts of the ‘mechanicals’ (Nick Bottom, the weaver; Peter Quince, the carpenter; Snug, the joiner; Francis Flute, the bellows-mender; Tom Snout, the tinker and Robin Starveling, the tailor), the comic characters who perform a play within the play, to critical acclaim at our own Northern Stage. But The People’s connection with Shakespeare goes back almost 100 years and, although the theatre company wasn’t based on this side of the city then, Heaton was nevertheless already centre stage (if you can forgive the pun) and has remained deeply connected to both the theatre group and the bard.

The People’s was founded in 1911 by members of the Newcastle branch of the British Socialist Party to raise money to fund their political activities and enable them to pay the rent on their meeting rooms at the corner of Leazes Park Road and Percy Street. (Today you’ll find Tea Sutra Teahouse in what was to become the new company’s first home).

The first meeting of around half a dozen interested members was dominated by one family: 32 year old telephone engineer, Norman Kidd Veitch, and his wife, Edith, who lived at 19 Stratford Grove Terrace, Heaton and, Norman’s younger brother, Colin Campbell Mackenzie Veitch and his wife, Minnie, who lived just around the corner at 1 Stratford Villas. Fittingly both couples lived in what we now call Heaton’s ‘Shakespeare Streets’, a group of roads with connections to Shakespeare, the story of which goes back to the 1864 celebrations of the 300th anniversary of Shakespeare’s birth.

Colin was, of course, a professional footballer, still fondly remembered as Newcastle United’s most successful captain in the Edwardian era, during which the club won three Football League Championships and graced Wembley six times in seven years, at a time, of course, when FA Cup semi-finals weren’t played there, and the first League Cup was still fifty years away. 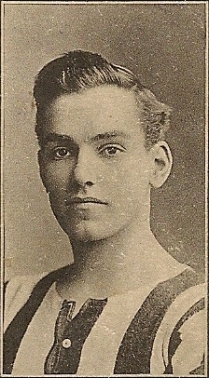 But there was much more to Colin Veitch than his football talent, immense though that was, as shown by his presence at that inaugural meeting of the Clarion Dramatic Society, as it was then called. Sometime between the initial meeting and the society’s first dramatic performance on 11 July 1911, Veitch captained Newcastle United, the holders, in the 1911 FA Cup Final (which they lost 1-0 to Bradford City after a replay at Old Trafford) but he was by now approaching 30 and in dispute with Newcastle United, and so although it was only the outbreak of WW1 which brought the final curtain down on his playing career, he was ready for new challenges. 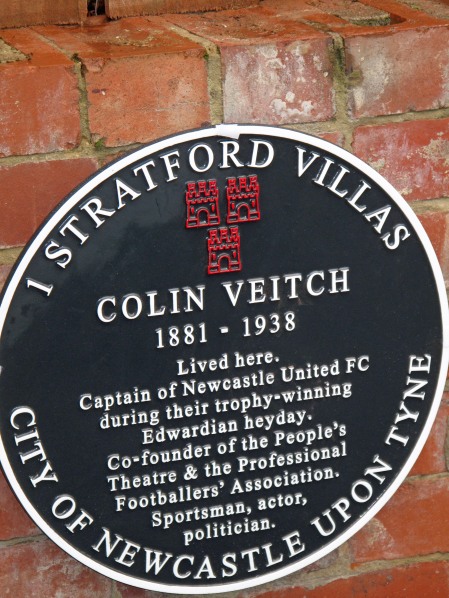 The Veitches, as well as being keen socialists – Colin was a founder member and later chairman of the Association Football Players Union (now the PFA) and turned down the invitation to stand as a Labour MP – were all lovers of the arts. Minnie was a star of Newcastle Amateur Operatic Society, where Colin, Norman and Edith were members of the chorus; Colin wrote music and conducted; Edith and Norman both wrote plays, a number of which were performed by the Clarion and later The People’s, so what started as an income generator for the British Socialist Party soon took on a life of its own.

From the beginning, the Clarion were ambitious. They performed the works of George Bernard Shaw, the eminent contemporary – and socialist – playwright.  They also performed Ibsen, Galsworthy, Chekhov and other great playwrights. As Norman Veitch said: ‘ If we are going to murder plays, let us murder the best’.

In 1920, the company invited George Bernard Shaw to see them perform. Shaw replied ‘I wouldn’t travel so far overnight in a railway train to meet Shakespeare himself’ but come he did on 25 April 1921 to see the company perform his play ‘Man and Superman’, with Colin Veitch playing the part of Old Malone.

The next and final play of the landmark 1920-21 season was ‘The Merry Wives of Windsor’,the Clarion’s first Shakespearean production. Colin Veitch was Falstaff, Minnie and Edith merry wives. Norman Veitch later wrote that ‘it was a jolly and inspiring performance’.

That summer, the Clarion was renamed The People’s Theatre and Shakespeare became a staple: ‘Antony and Cleopatra’, ‘The Comedy of Errors’, ‘Coriolanus’, ‘Cymbeline’, ‘Hamlet’, ‘Henry IV Part 1’, ‘Julius Caesar’, ‘King Lear’, ‘Love’s Labour’s Lost’, ‘Measure for Measure’, ‘The Merchant of Venice’,  ‘A Midsummer Night’s Dream’, ‘Much Ado About Nothing’, ‘Othello’, ‘Pericles’, ‘Richard II’, ‘Romeo and Juliet’, ‘The Taming of the Shrew’, ‘The Tempest’, ‘Troilus and Cressida’,  ‘Twelfth Night’, ‘Two Gentlemen of Verona’ and T’he Winter’s Tale’, were all performed before the company moved to Heaton.

The People’s Theatre was based in a disused chapel in Rye Hill from 1930 but by 1953 the company recognised it had outgrown the premises and they set their sights on their own arts centre. A public appeal was launched in 1955 at a luncheon attended by Sir John Gielgud and Peggy Ashcroft. Eventually by 1959 a suitable building was found and enough money was in the bank to start to convert it into a theatre. 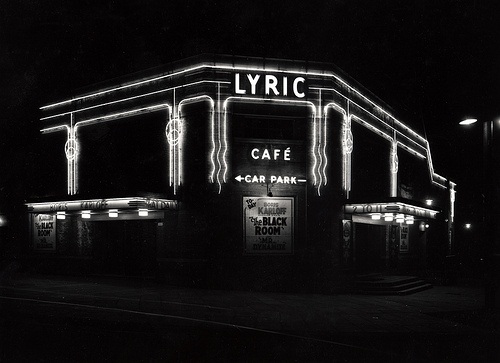 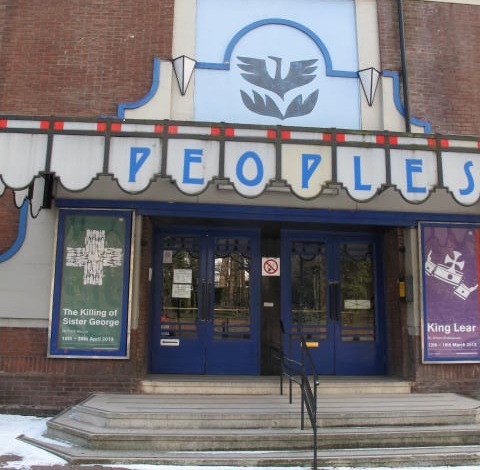 The soon to be refurbished People’s Theatre

The building was the recently closed Lyric Cinema, next to the Corner House on Stephenson Road (the Coast Road). It reopened as a theatre on 24 September 1962, with Shaw’s ‘Man and Superman’ (of course!) and the season appropriately ended with the People’s first Shakespeare performance in Heaton, a Christmas production of ‘Twelfth Night’. The official opening by Princess Alexandra followed on 20 October 1964.

The company continued to bring new Shakespeare plays to Heaton audiences eg Henry IV Part 2 (1965), Richard III (1967), Henry V (1981) but soon there was an even more exciting development, which cemented the east Newcastle relationship with Stratford which had begun with Frank Benson’s company in 1895.

RSC at the People’s

The RSC had made Newcastle its third home in 1977, bringing productions annually from Stratford to the Theatre Royal and the Gulbenkian, but in 1987 and 1988 they needed a third venue and so actors such as Jeremy Irons and Brian Cox trod the People’s boards.

The second season will always be remembered for a particularly gory production of ‘Titus Andronicus’, after which reports of fainting audience members even  made the pages of ‘The Sun’!

The RSC returned to Heaton in 2004 when the Newcastle Playhouse (now Northern Stage) was undergoing refurbishment. It’s an honour for both the People’s and Heaton for our own theatre company to be able to accept a return invitation to Stratford twelve years later in this most special of seasons for both theatres. There’ll be a few charabancs of Heatonians heading down to the midlands in June. It would be lovely to welcome members of the RSC back to our own soon to be even more fantastic theatre before too long.

The main sources used in researching this article were:

Chris Goulding ‘The Story of the People’s’

If you have memories of the People’s or any performances or readings of Shakespeare in Heaton or can provide further information about anything mentioned in this piece, please contact us, either by clicking on the link immediately below the title of this article or by emailing chris.jackson@heatonhistorygroup.org

This article was written and researched by Chris Jackson, as part of Heaton History Group’s project to commemorate the 400th anniversary of William Shakespeare’s death.

We are interested in connections between Heaton and Shakespeare through its theatres, past and present; writers, actors – and of course, the famous brick Shakespeare on South View West. See:

A Road By Any Other Name

George Waller: life as a champion