Take a stroll through Jesmond Old Cemetery and you’ll come across this imposing headstone. 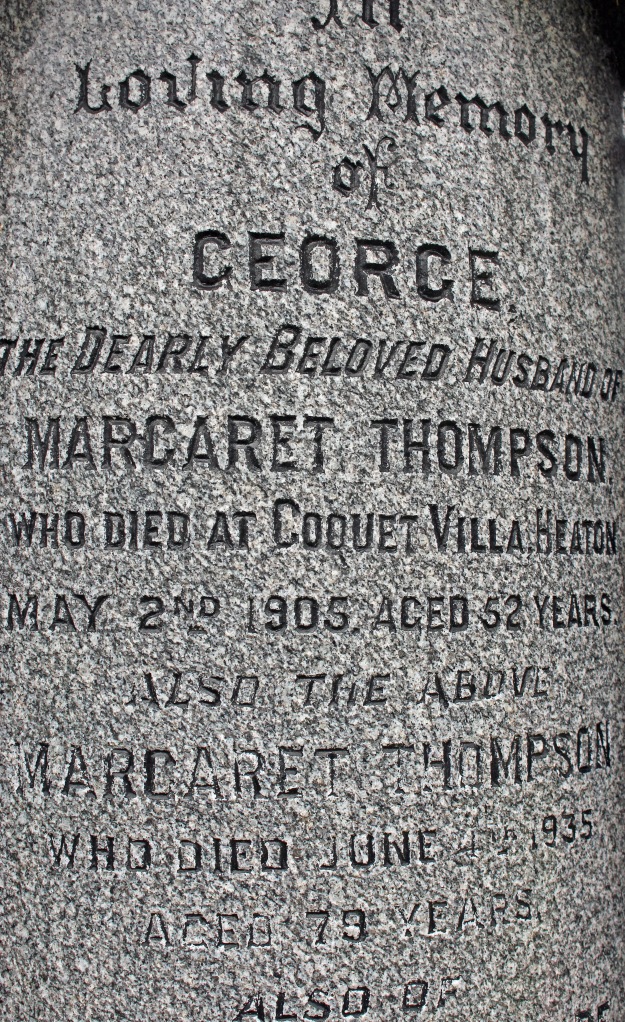 It marks the grave of George Thompson, who, the inscription tells us, ‘died at Coquet Villa, Heaton on May 2nd 1905’. It’s quite unusual for a gravestone to pinpoint where its incumbent passed away so it suggests that Coquet Villa was a special place for the deceased and his family.

The name ‘Coquet Villa’ may not be familiar to you – the gatepost on which its name was carved was replaced decades ago – but, a hundred and ten years later, the house is still much admired, one of only two private residences to have been nominated in Heaton History Group’s 2013 bid to find Heaton’s favourite buildings. Coquet Villa was the original name for 246 Heaton Road, which you probably call ‘the turret house’.

The land on which the house stands was sold by William Watson-Armstrong, Lord Armstrong’s nephew and heir, on 31 December 1900 just 3 days after his uncle’s death. The agreement stipulated that two semi-detached residences be constructed within nine months of the contract being signed. George Thompson paid £574 11s 1d, a substantial sum then. However, it was some 21 months earlier, in March 1899, that he had first commissioned the well-known local firm of architects, Hope and Maxwell, to draw up designs for a pair of semi-detached houses to fit the site. This suggests that plans for the sale of land were in train well before Lord Armstrong became ill.

The two houses were of similar specification, apart from the distinguishing feature of that on the right – the one which Thompson chose to be his own home and called ‘Coquet Villa’. It’s only this one that has the famous attic turret. Like you, we wondered why.

William Hope and Joseph Charlton Maxwell are particularly remembered for their design of theatres, not only locally in Blyth and Newcastle, but as far afield as Glasgow, Margate and Southampton. Sadly the Hope and Maxwell theatres have all been demolished or destroyed by fire, but another of their public buildings does still stand – almost next door to Coquet Villa: it’s Heaton Methodist Church – and it too had a single turret until very recently.

Churches and theatres have to be more than functional buildings, of course: they’re designed to raise the spirits. If that was the aim of Hope and Maxwell and their client, Coquet Villa, still much enjoyed by passers-by as well as those lucky enough to live there, can be considered a huge success.

George Thompson, the son of a Warkworth grocer, described himself as a ‘commercial traveller’. He and his Scottish wife, Margaret, moved to Newcastle, living first in Malvern Street, Elswick, and then at 22 Simonside Terrace before they were eventually able to afford their long term family home, which they nostalgically named after the river that flows through George’s boyhood village.

After the delay to the start of the build, things moved apace and George and Margaret soon moved in with their teenage sons, 17 year old Lonsdale Copeland and 14 year old Norman Malvern (who, again rather romantically, seems to have been named after the Elswick street in which his parents began their married life).

Perhaps Warkworth is a clue to the turret too. George grew up in the shadow of the famous castle and perhaps wanted to recreate some of its grandeur in his own dream home. Margaret too grew up close to a magnificent castle not short of turrets: she was from Edinburgh.

But a visit to Tyne and Wear Archives to view the original plans showed that internally the turret served a more practical purpose. As you can see from the image below, the front room in the attic was designed to be a billiards room. It was the ideal place for the two boys to hang out without disturbing their parents or perhaps George enjoyed the company of his sons over a game. We don’t know. But it is clear that the room was designed to accommodate the table with just enough room for the players to move around it comfortably. So where would onlookers and the player awaiting a turn at the table sit without being in the way? On a recessed window seat of course, with lovely views over Heaton Park towards Newcastle. In a turret. Genius!

The house is a large one for a family of just four but the additional space was used. The Thompsons were joined by a niece of George’s, Christiana ‘Cissie’ Robson and the 1901 census shows them having a live-in servant, 18 year old Agnes Chandler.

Sadly George did not enjoy Coquet Villa for long. As we have seen, he died there just a few years later at the age of 52. But what happened to his bereaved family?

Margaret, Cissie and the boys remained in the family home until, in 1910, Lonsdale married Frances Maud Holland, daughter of Sir Thomas Henry Holland, an eminent geologist. (In 1939 Thomas was awarded the Royal Society’s prestigious Albert Medal, an honour earlier bestowed on at least two other men with Heaton connections, Lord Armstrong in 1878 and Charles Parsons in 1911). Frances had been born in India where her father was working at the time. Her mother was also born in India). The newlyweds started married life in Gosforth with Lonsdale making his living first as a woollen merchant and then a tailor, with his own business. At the time of his death, in 1957, he was living in Great Malvern in Worcestershire.

In 1916, Norman married Jeanne Julie Maude Rodenhurst, the youngest of six children of Harry, a wholesale millinery merchant, and his French wife, Jeanne, who lived in Deneholme on Jesmond Park East. The wedding was at St Gabriel’s Church. Norman set up as a market gardener in Ponteland, where he was eventually succeeded by his and Jeanne’s son Derrick. Jeanne’s brother, also called Norman, described himself as a tomato grower, so it’s possible that the brothers in law set up in business together. Norman died in 1968 and is buried in the family vault in Jesmond Old Cemetery with his wife Jeanne, his father and his mother, who died in 1935 at the age of 79.

Cissie died on 25 October 1914. Three days later, her funeral cortège processed from Coquet Villa to Heaton Station to meet the 8.05 train to Rothbury, where she was interred.

But with the war over, Cissie having passed away and her sons flown the nest, Margaret sold the family home, now clearly too big for her. The purchaser was a man called Frank Fleming, who stayed only three years.

Next came Charles and Mary Kirk, whose family was to be associated with Coquet Villa for another 14 years. Charles, like his father Samuel before him, was a slate merchant. Samuel Kirk was born and grew up in Boston, Lincolnshire but by 1871 had moved to Newcastle, no doubt to take advantage of the building boom in the industrial North East. He set up on his own in 1883 in Ridley Villas, following the dissolution in 1883 of a partnership, Kirk and Dickinson. The firm eventually passed to his son, Charles, who in 1911 was living at 14 Rothbury Terrace with Mary, his wife, five children (May 8, Annie 7, Samuel 6, Mary 4 and Charles 2) and two servants, Annie Wood and Florence McIntoch.

By 1917, the family had moved round the corner to 18 Jesmond Vale Terrace. In that year, with World War One raging, we know that Charles sailed from Sydney to San Francisco on the SS Ventura, that ship’s final voyage before it was commissioned by the Australian government to transport troops. In January 1918 he sailed from New York to Liverpool on the SS St Louis. His occupation is given as ‘exporter’. The ship’s Wikipedia entry illustrates just how hazardous these journeys were:

‘On 17 March 1917, she [SS St Louis] was furnished an armed guard of 26 United States Navy sailors and armed with three 6-inch guns, to protect her from enemy attack as she continued her New York-to-Liverpool service. On 30 May, while proceeding up the Irish Sea and skirting the coast of England, she responded rapidly to the orders, “Hard Starboard,” at the sighting of a periscope, and succeeded in dodging a torpedo while apparently striking the submarine which fired it. Later dry-dock examination revealed that 18 feet of her keel rubbing strake had been torn away. On 25 July, her gunners exchanged fire with a surfaced U-boat, some three miles away, and sighted many near misses.’

A book (‘Missouri at Sea’ by Richard E Schroeder) refers to the ‘bitter North Atlantic storms of 1917-18′. It would be fascinating to know more about what took Charles around the world at such a dangerous time. Another so far unanswered question is whether Kirk’s slates were used on the roof of Coquet Villa – and its locally famous turret.

Like George Thompson though, Charles and Mary didn’t enjoy Coquet Villa for long. Charles died in 1925, aged only 59, and Mary in 1927, after which the house was let to a number of tenants including Joseph Hilliam, a wallpaper manufacturer, and Joseph H Hood, a musician. Eventually, in 1936 it was sold to Harriet May Morton, wife of John Hugh Morton, a cashier.

Like many of the other owners, the Mortons moved only a matter of yards – from what would then have been a new house on Crompton Road almost opposite Coquet Villa. Later occupiers included Martha Ellen and Allan Frankland Holmes; Ronald George Smart, a commercial traveller; Alexander Reed Morrison, a medical practitioner; Torleif Egeland Eriksen, a Norwegian dental surgeon and his wife, June Margaret; George and Thora Brown of Thetford in Norfolk and Dr M M Ahmed. We hope you’ll help us uncover more about some of them in due course.

Like the Thompsons, the current owners, Helen Law, a fine artist originally from Leicester (where, incidentally, her great grandfather set up a football boot manufacturing company – the firm made the retro boots used in the 1982 film ‘A Captain’s Tale’ about West Auckland Town winning the first World Cup) and Richard Marriott, a teacher, saw the house as the ideal family home. Although separated from the original owners by a century or more, they clearly share the romanticism which led George Thompson to name the house after the River Coquet, on the banks of which he played as a boy and to commission an architect to echo the magnificent castles so familiar to him and his Edinburgh-born wife. On their first night in their new home, Richard donned a suit, went down on one knee and proposed to Helen in the turret. Later, they lovingly restored the attic, which had long been an unloved dumping ground, to its former glory. They renovated the turret, building a magnificent new window seat, which they enjoyed with their children and still love to sit in today.

You feel sure that George and Margaret would approve.

You may have noticed (June 2015) that 246 Heaton Road is up for sale. As with Margaret Thompson, almost 100 years ago, the house is too big for the current owners now that their children have flown the nest.

If you can add to the story of Coquet Villa and those who have lived there – or you would like us to look into the history of YOUR house, either leave a reply on this website by clicking on the link immediately below the article title or email chris.jackson@heatonhistorygroup.org