20th August 1884 lived long in the memory of Victorian Heatonians. It was the day that royal visitors to the city processed down Shields Road, North View and Heaton Park Road before driving through Heaton Park, across Benton Bridge and Armstrong Bridge into Jesmond Dene. Once there, the Prince of Wales (later Edward VII) officially opened Armstrong Park and Jesmond Dene, the fine public spaces which, along with Heaton Park (opened a few years earlier in 1879), had been created on land presented to the people of Newcastle by Sir William Armstrong. Almost all of Heaton came out to see the first royal visit to Newcastle in thirty years and the first by the then Prince of Wales. The event was covered extensively in newspapers, not only locally but across the country. 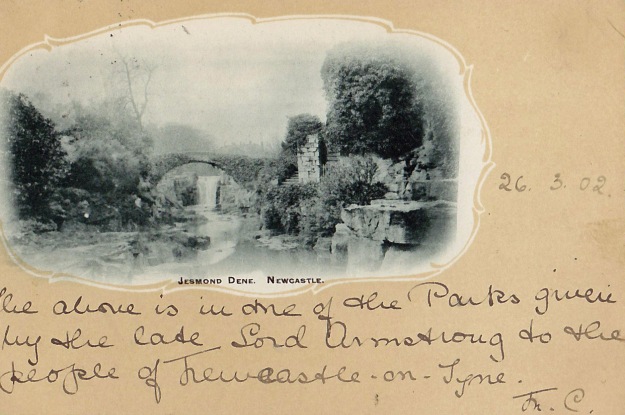 In the days before the event, there was speculation (and disappointment) about the route the royal procession would take:

The changing of the route has effected the subscription list considerably but as to make the alteration would lengthen the route, the suggestion of allowing the procession to pass along Heaton Road was not entertained. Newcastle Courant, Friday 1 August 1884

A ‘Decorative Executive Committee’ of the council was formed with a chairman and three vice chairmen and separate committees set up for individual streets down which the royal party would pass on route to Heaton. There would be triumphal arches in Barras Bridge, Northumberland Street, New Bridge Street, Grainger Street and Grey Street (two). The representative of the Byker district:

presented a plan for a triumphal arch to be placed at the old toll gate at the east end of Byker Bridge. The plan is for an imitation of Temple Bar and it will be called ‘Byker Bar’.

With huge crowds expected, there was understandable concern about the arrangements for spectators:

The road from the west end of Benton Bridge to Jesmond Grove is very narrow and barricades will be erected along it, a limited number of people being admitted behind the barricades by tickets…. the distribution of which will be made by Newcastle Town council. Newcastle Courant, 15 August 1884

The day itself almost started disastrously.

As the procession was passing up Grey Street, the horse ridden by Colonel Young of the Newcastle Artillery Volunteers, suddenly grew restive and became entangled with the wheels of the royal carriage and, in the struggle to liberate itself, swung round, bringing the sword of the rider into dangerous proximity to the head of the Prince of Wales, who had to bend down to escape a blow thereof. Nottingham Evening Post, Wednesday 20 August

After this narrow escape, which might have changed the course of history, the royal party headed east:

At Byker, the prince obtained a view of many artisans’ dwellings, in the improvement of which His Highness has evinced a strong practical interest. Newcastle Courant Friday 22 August

Impassable in its beauty

But early near miss aside, the day seems to have gone well, at least if the flowery language of the reporters of the day are to believed:

It was within the grounds of [Heaton] Park that one of the most pleasant sites of the whole day came into unexpected view. On a verdant slope, some thousands of children connected with the various educational schools in the city were congregated. The young faces were all eagerness with the prospect of seeing the royal personages. The majority of them were dressed in gay summer costumes and appeared veritably on the green sward like a ‘bed of daisies’… When the Prince and Princess of Wales came in view of the children, the sweet and fresh voices rose in swelling notes with ‘God bless the Prince of Wales’, the strains of this splendid anthem ringing through the woods and dales of Jesmond with a most charming effect..

Carriage drive the royal procession would have taken through Armstrong Park

From there the royal carriage ‘wended its way at a brisk trot to the elegant bridge which spans Jesmond Dene, and which is a magnificent and useful gift of Sir William Armstrong.’

After the prince had planted a commemorative oak tree using a silver spade, the party sat down to a sumptuous meal in the newly renovated and lavishly decorated Banqueting Hall. The parks were praised fulsomely in press reports all over the country, such as this in The Yorkshire Post and Leeds Intelligence, Thursday 21 August:

… one of the handsomest public grounds in the north of England. The natural scenery is almost impassable in its beauty and where nature has rested and left a spot whereon the eye could not rest with pleasure, art has stepped in to finish off the work.

…the brawling stream, the roaring waterfalls, the song of thrush and blackbird, the winding walks, the precipitous banks and the abundance of trees and shrubs, coupled with the ancient mill house and the ruined water wheel makes that portion of the Dene one of the most charming and attractive spots in the two northern counties.

There are several wells in the Dene and around some of them quaint old legends cluster. From what ‘Ye Old Well of King John’ derives its name, there is no exact information. There is a tradition that there stood a palace in the immediate vicinity which King John for some time inhabited.

It brings a lump to your throat! We’re lucky enough to still be able to access Heaton and Armstrong Parks and Jesmond Dene today, of course, 130 years after their official opening. Get out and enjoy them but also find a few moments to post your memories of the parks here or email them to chris.jackson@heatonhistorygroup.org