School education in Newcastle has gone through many changes since the mid nineteenth century. Using research undertaken while writing a history of the National Union of Teachers (NUT) in the northeast, in April Peter Sagar will guide us through 170 years of history and show how the lives of Newcastle schoolchildren, of which Peter was himself one, were affected by when, as well as where, they were educated.  This will be a fascinating talk, of interest to anybody who went to school, whether in Newcastle or not.

Heaton History Group member, Peter Sagar is a well respected local historian who has many published articles to his name and has taught history and geography for over 30 years.

Peter has an M Phil in the regional identity of north east England from the University of Northumbria and is a founder and company secretary of A Living Tradition, which seeks to help people in our region to learn more about our great traditions of human rights and community cohesion and to be inspired to help continue them. 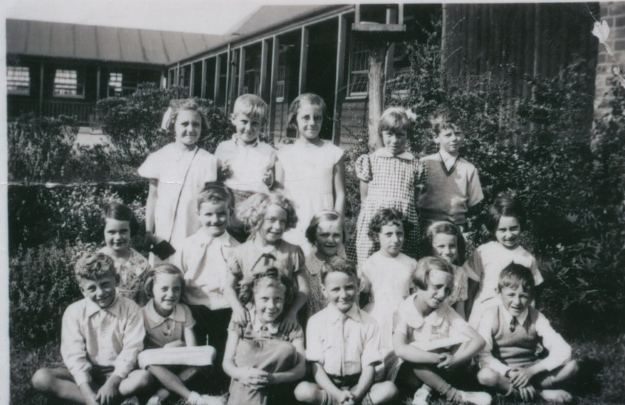 This photograph of pupils at High Heaton Infants School was taken in 1935.

Geoffrey Wedderburn, formerly of 60 Swaledale Gardens, is the boy at the end of the back row and he wonders whether anyone can help him out with other names. He remembers Dennis Hill, Leslie Fox and Tom Fineron from his schooldays but isn’t sure whether they’re in the picture.

High Heaton Infants School first opened on 20 August 1929 with 164 children on the roll. The school records are in Tyne and Wear Archives so we know the names of the first head, Mary L Ken, and her staff that day: Ethel Cooper, Joy Thompson, Alice Bertram Hodgson , Minnie Watts and Jeanie Richardson. Geoffrey remembers Miss Venters, Miss Hopkins and Miss Darling from his own schooldays. We found in the archives that Miss Caroline Isobel Venters joined the school on 7 April 1934.

The school was situated close to where the Spinney flats are now in a wooden building which later became High Heaton library. It was known simply as ‘the wooden school’. Geoffrey recalls that the buildings formed 3 sides of a square and that the open side gave access to a grassed play area. He remembers maypole dancing there on one occasion. 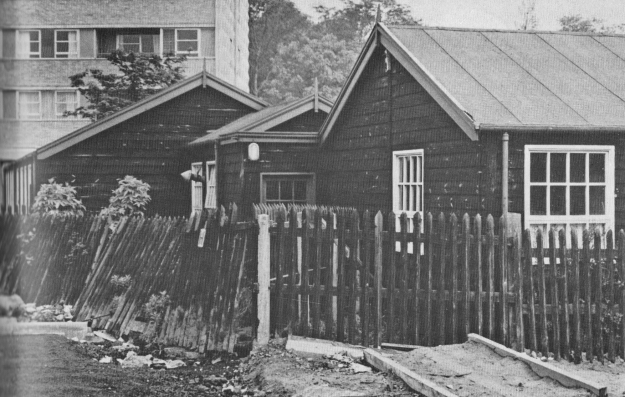 The wooden buildings which housed High Heaton Infants School and then, until 1966, the library

Geoffrey says that despite the fact the headmistress ruled by terror, he was ‘quite happy at the school and rather sorry when I had to leave’. The log book confirms it was considered a good school. An inspector is quoted in 1935 as saying ‘Good use is made of the adjacent hall for dancing and physical training and the neatly cultivated garden is a valuable addition to the amenities of the premises’.

In 1931 another inspector said ‘The children are of a good educable standard, thus some of the handicaps imposed by a poor environment are not felt here’.

Reading the entries in the log book, you’re struck by the number of days the children had off to commemorate royal occasions. The investiture of the Prince of Wales in February 1934 was especially noteworthy as the head teacher was invited to the ceremony at Buckingham Palace and was granted three days leave to attend. The lord mayor, director of education and chief ‘inspectress‘ visited the school the following week to congratulate it on behalf of the city on the honour bestowed on the head by the king.

Later in the year, the school shut again for the marriage of the Duke of Kent in 1934; in 1935 there was the wedding of the Duke of Gloucester and then the Royal Jubilee; and the funeral of King George V followed in 1936. All these on top of the usual general and local elections: it’s surprising any of the children learnt to read!

But with the population of High Heaton growing as the city expanded and cleared inner-city ‘slums’, the ‘wooden school’ was too small to cope and it finally closed at midday on 25 March 1937 with Cragside Infants School opening its doors on 5 April. Geoffrey recalled that the opening ceremony ‘was carried out by the very young Princess Elizabeth’.

At Cragside, we read of a measles epidemic in 1938 and, of course, the disruption caused by World War 2. On 1 September 1939, the school evacuated to Morpeth. It reopened in High Heaton on 1 April 1940 but on 7 July some children were evacuated again – this time to Westmorland.

On 4 September 1940: ‘Air raid damage near school. Four window panes splintered. the three covered with net did not fall out’.

On 1 March 1941 a temporary headteacher was appointed ‘owing to the evacuation of the head mistress, Miss J S Nattress with the school party’. Miss Nattress returned a couple of months later. And in 1944 the school admitted evacuees of its own – from London.

After the war, things slowly got back to normal. In 1946, the Education Committee granted the school £15 as a victory prize. Garden seats were purchased.

The following year brought one of the worst winters in living memory. On 26 February ‘Very heavy snowfall this week; snow drifting on the verandah makes movement very restricted’ On 14 March ‘Storm continues’.

And with normality, a resumption of royal occasions:

On 27 November 1952, children walked with teachers to Stephenson Road, where they saw HRH Princess Margaret passing on her way from launching a ship at Walker Naval Dockyard to Alnwick Castle.

But on 5 June 1953 the weather intervened: ‘a coronation celebration picnic on the school playing field was planned but impossible because of the rainy weather. Games were played in the school hall’. A familiar scenario to generations of Cragside children looking forward to sports day!

Children and Teacher at Cragside School by Laszlo Torday

Geoffrey Wedderburn for his photograph and memories

Tyne and Wear Archives for their help

The photos of the wooden school were taken from ‘Bygone High Heaton and district’ by William Muir, Newcastle City Libraries and Arts, 1988

We’d love to hear your memories and see your photographs of High Heaton Infants or Cragside School. Please either click on the link immediately below the title of this article or email chris.jackson@heatonhistorygroup.org