Writer Jack Common was born on 15 August 1903 at 44 Third Avenue, Heaton, Newcastle upon Tyne. He attended Chillingham Road School. He is best remembered for his autobiographical novel, Kiddar’s Luck, which describes growing up in Edwardian Tyneside, and for the fact that his likeness was used by sculptor, Lawrence Bradshaw, for the bust on Karl Marx’s tomb in Highgate Cemetery, London. Jack Common died on 20 January 1968. He is commemorated by a plaque on the house where he was born. 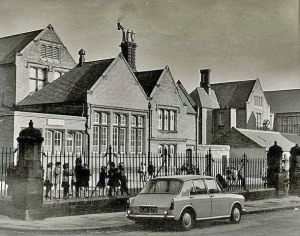 On 23 October 2013, Heaton History Group presented a talk on Jack Common by Keith Armstrong at Jack’s old school, Chillingham Road, to commemorate the 110th anniversary of his birth and the 120th anniversary of the school.

From 16 February – mid April 2015 there will be an exhibition about Jack Common in the Chillingham pub, as part of our Heritage Lottery Fund project ‘Heaton Avenues in Wartime’

Thank you to Newcastle City Library for the photograph of Chillingham Road School.