John Gilroy is considered by many to be the best commercial poster artist of the 20th century, credited with inventing ‘visual silence’ in advertising. John spent his early life in Kingsley Place, Heaton.

Born in 1898, John Gilroy was son of a marine draughtsman who was himself a painter of some note. At 15 he was already a freelance cartoonist for the Newcastle Evening Chronicle and at 16 he won the Christie Scholarship to attend Armstrong College Art School in Durham University. After war service, Gilroy won a Scholarship to Royal College of Art, Kensington. In 1925, he joined Benson Advertising Agency in London as a commercial artist and started to produce the work for which he is best remembered: iconic images that had humour, visual absurdity and simplicity of form. 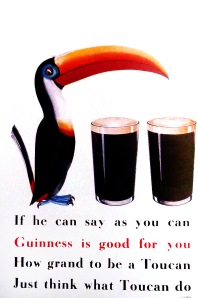 But Gilroy was also a portrait and landscape painter: between 1930 and 1953, he exhibited at the Royal Academy 15 times. Among his paintings were many of the royal family, politicians, actors – and, as anyone who came to our recent quiz will remember, even a pope (John XXIII).

Our speaker on Wednesday 28 May, David Hughes, has just written a book about John Gilroy and his art: 400 original canvases recently came to light in the USA, some selling for £10,000. The book, Gilroy was Good for Guinness, is the story of this lost art.

The event will take place at the Corner House Hotel on Heaton Road. We expect this event to appeal to artists and designers as well as those with an interest in Heaton and its history, so please book to ensure you’re not disappointed. And be in your seat by 7.15 so that we can offer any unclaimed places to those on the waiting list or who come on spec. To reserve your place, contact Maria Graham: maria@heatonhistorygroup.org / 0191 215 0821 / 07763 985656. FREE to members; £2 to non-members.