Keith Fisher has vivid memories of growing up in Heaton in the 1950s and ’60s. Here he recalls an encounter with an old Heaton business that most of us won’t have been aware of – and brings its story up to date:

Travelling south on Heaton Road there’s a final block of houses and shops on your right just before you cross the railway line.  It used to accommodate the Co-op chemist, barber Peter Darling, Gazzilli’s ice-cream parlour, and finally, at the end, a shop that never attracted much attention who sold ball-bearings if I remember correctly: well, I suppose someone had to. 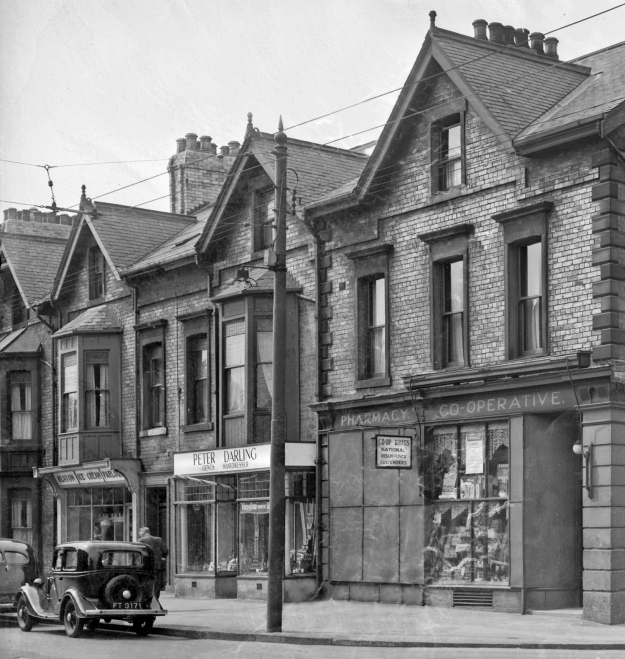 Just before that unassuming outlet for little steel balls, there remained a couple of houses; at one time, of course, they may all have been houses, with the possible exception of the pharmacy.  One of these houses – until then quite unregistered in our existence – opened its door to us after our gran had treated my sister and myself to ice-cream on an evening in coldest, darkest December.  We were led into a front room lit by a tired gas mantle plus a fire in the range attended by an old lady sitting in a dark corner.

Val and I were about five or six years old, so it was still the 1950s, and Gran must have been about fifty five – which we thought was terribly old; but that lady in that gloomy room must have been eighty five at least, and, just like our great gran: ancient beyond our conception.

However, not all of this was inconceivable to us, considering the majority of Byker was still without electricity; and Shieldfield folk, where our maternal grandparents and assorted family lived, were still comfortably co-existing with those big old black-leaded ranges that were the forerunner to our Agas.  We’d seen ironing done on the kitchen table with a pair of flat irons heated on the range; and eaten Yorkshire Puddings cooked in a big, square, cast-iron dish from the ‘oven bottom‘ (the finest I’ve ever eaten); we’d heard the whistle of the kettle hanging above the coals; and smelt the overwhelming aroma of kippers cooked on a rack over a glowing wood fire; all just part of the life our father’s parents, then our mother, had left behind to live in new-build semi-detached flats on the Heaton Hall Estate.

So back in that unfamiliar house the air of mystery was not the anachronistic room, nor the presence of the old lady, but the reason for our presence there, which was very quickly established as we looked around walls lined with trestle tables piled high with cheap cardboard boxes; the open ones on the top revealing Christmas decorations of the streamer, paper globe or bells variety, plus assorted novelties associated with Yuletide occasions like the inevitable glinting silver and gold tinsel, and – obviously – brightly coloured glass baubles shining like treasure in the firelight: an Aladdin’s Cave!

Peering up, we wandered along the rows of boxes while gran handed things down for us to examine, suggesting this one or that, some of these or some of those, and all the while accompanied by the old lady deftly pulling out box upon box of festive magic and stacking them on an empty table; until finally, we were done; brief words were exchanged between gran and herself, and away we went… empty-handed, taking none of the treasure with us… it was all left behind!

Recollecting many years later, I asked my grandfather what it was all about, and he told me it was a company he did business with: The Heaton Paper Company, who sold him his paper bags.  The treasure left behind had all been delivered to his shop of course, and would subsequently materialise at our house and gran’s house a few days later; just in time to decorate the freshly arrived Christmas trees, festoon the living rooms with streamers, and hang the paper ornaments from lights and window bays.

Now then, fast forward fifteen years to a fine house in Gosforth where two friends lived: Danny and Mark Jacobson.  Remarkably, it turned-out their father owned The Heaton Paper Company, and I learned that the impromptu wholesale showroom in that house on Heaton Road was set up each December to allow local traders to choose stock for the Christmas season; my grandfather, being a wholesale customer, had access to this facility for his own personal consumption of course.

So, fast forward yet again to the present – or at least to the present present, which is 2018 – and let me tell you what I learned recently from Mark Jacobson, who I am happy to say remains a good friend, even though I see very little of him, and even less of Danny:

Their father (an engineer) got out of Poland before the Germans arrived and was in London when an old acquaintance from Warsaw suggested he to come up to Newcastle where he owned a toilet-paper factory and needed the skills of an engineer.  At some point thereafter, this fellow took off for South Africa; the business went down the toilet; and Mr Jacobson found himself unemployed.

Crossing Shieldfield one day, he saw a workman on a building site making a bonfire out of empty cement bags; knowing a thing or two about paper by then he asked the fellow if he could have the bags.  He returned the following day to consult the gaffer and was told he could have all he could take away.  So, from then on, he commandeered all the empty paper sacks he could, because he knew that they were made up of multiple layers of paper that could be separated from the inner and outer contaminated layers, providing him with good clean paper… free.  Starting off in his lodgings, he cut up the sheets, glued the edges with flour paste and produced paper bags which he then sold to local businesses – my Grandfather’s included.  When Danny and Mark retired recently, they sold what had become an enormously successful company manufacturing and distributing a vast array of products.

A remarkable conclusion to a misty memory; and a wonderful success story.

If you know more about The Heaton Paper Company or any historic Heaton business, we’d love to hear from you. Please either leave a reply on this website by clicking on the link immediately below the article title or email chris.jackson@heatonhistorygroup.org