Asked to name the world’s greatest golfers and you’ll probably mention Tiger Woods, Jack Nicklaus and perhaps, if you know your sporting history, Bobby Jones. But did you know that a young Heaton man coached the latter and, before his untimely death, was known as one of the great golfers of his age? In fact, James Douglas Edgar still has a place in the record books, as a century ago this year, he won the Canadian Open, by a record 16 strokes, a margin of victory still unsurpassed for any PGA Tournament.

Google Edgar’s name and you’ll find plenty of information about this remarkable sportsman but what you won’t read is that he was a Heatonian. Now, thanks to the painstaking research of Heaton History Group’s Arthur Andrews, we can put that right.

The story of the Edgar family of Heaton Town Farm has already been published on this website. In 1871 two nephews, John and Thomas, described as agricultural labourers, were living at the farm. One of them, John, would later become the father of James Douglas Edgar, who was born on 30 September 1885.

In 1891, John Edgar (40), a foreman land drainer on Christopher Laycock’s Estate, his wife, Ann (38) and their four children, Margaret (17) a dressmaker’s apprentice, John (15) a cricket club assistant groundsman, James Douglas (6) a scholar and Edward, recently born, were living in an upstairs flat at 45 Seventh Avenue. All four children had been born at Heaton Town Farm, so the family may have moved to Seventh Avenue soon after Edward’s birth.

James lived in Seventh Avenue until his mid teens when the family moved to Gosforth.

From a young age Edgar had caddied and played golf on the Town Moor. By the age of 16, he was working at a golf club and a year later was winning competitions with the United Workmen’s Club. He caught the eye of J S Caird, the professional of the City of Newcastle Golf Club, based on the Town Moor. Caird saw potential in Edgar and took him under his wing, inviting him to be his assistant at the ‘City’ club. Part of the job would have been making and repairing the wooden golf clubs of the time. 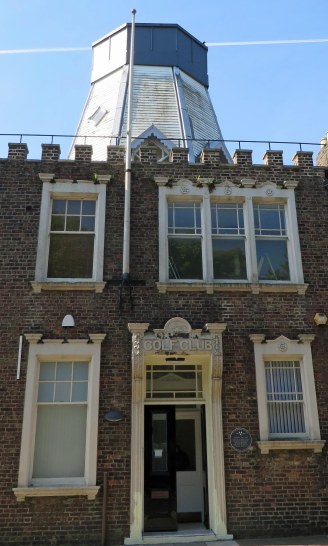 In 1907 Northumberland Golf Club were looking for a new professional and J S Caird put forward J Douglas Edgar’s name for the post and so, in his 20th year, he took on this important role. By all accounts Edgar settled in well and was the complete professional – a competent player with a good swing and a powerful drive, a good teacher, golf club maker and golf club repairer. It is said that he was well liked but had a taste for drink – and women.

Edgar’s first big win as a professional was the 1914 French Open, which he  won in style with a score of 244 after 72 holes, beating some notable players of the time, including six time (still a record) Open winner,  Harry Vardon.

It was reported in The Journal of 10 August 1914 that Northumberland Golf Club presented Edgar with a gold half hunter watch, suitably inscribed and also a cheque from the members. At another presentation by South Gosforth Golf Club, Edgar was presented with another gold watch and a brooch for his wife in appreciation for his great achievement.

But by this time, Britain was at war. At first, Edgar’s involvement was confined to playing in charity tournaments to raise money for soldiers but the following year, aged 30, he enlisted as a Private in the Royal Army Medical Corps (RAMC). He was based locally, attached to No 1 Ambulance section.

Later in the war, Edgar was released to carry out munitions work at William Dobson Ltd, the Walker shipbuilders. However, on 24 January 1918 in reply to a letter from the Regimental Paymaster, Dobson’s stated that, while J D Edgar was still employed at the firm, he had not been seen for over four weeks. Edgar had submitted a medical certificate stating he was unable to work suffering from adhesions of the tissues to his left hip. The doctor’s note also mentioned that he was developing arthritis of the left wrist. The following month, the RAMC enquired as to whether Edgar had been admitted to the military hospital at Newcastle Barracks but he appears not to have been. Finally, in March 1918, Edgar was discharged, having been deemed unfit to serve due to an arthritic left hip. At this time, he was living in Gosforth Park.

On discharge, Edgar stated that he was a professional golfer but that his plan was to become a farmer at Brunton, Northumberland. At first, however, he returned to Northumberland Golf Club but after a dispute with members of the club’s committee following complaints about offensive behaviour, Edgar handed in his notice and he took the huge step of emigrating to America with his family. He sailed alone from Liverpool to St John, New Brunswick on 25 March 1919, arriving on 4 April. A surviving Alien Labor Certificate suggests he headed to New York before ending up in Atlanta.

Edgar secured a job at the new Druids Hill Golf Club in Atlanta, where he settled in well, being popular and amenable with the men and women of the club. This was also a time of unprecedented tournament success. He won the Royal Canadian Golf Championship in  1919 (by 16 strokes, still a PGA tournament record).

Satisfied that he had a future in the USA, he then returned to England for his family.  J D Edgar, his wife and two children, Rhoda (10) and Douglas (9), emigrated to the United States of America on 16 December 1919. They sailed from Southampton on the SS Adriatic and in 1920 were lodging with the Morse family in Atlanta.

Douglas’s success on the golf course continued. He won the Canadian Open again in 1920, beating the great Bobby Jones. He also won the US Southern Open Championship and was runner-up in the American PGA Championship, losing only by one stroke (Jim Barnes had won in 1916 and 1919 but no Englishman has won it since).

Understandably Edgar was also in great demand as a coach. He was credited by the great Bobby Jones as a key reason for his own success. He was also mentor and coach to Tommy Armour, who later won 3 majors and Alexa Stirling, arguably America’s greatest female amateur golfer.

And Edgar’s influence went far beyond those he was able to coach in person. His book ‘The Gate to Golf’, privately printed by Edgar & Co in St Albans in 1920,  had a big impact on golf instruction right up to the present day. In particular the abbreviated golf swing Edgar had perfected because he was restricted by his arthritic hip, became the norm.

Unfortunately, despite Edgar’s success, his wife and children did not settle in the USA. After less than a year they returned to Newcastle while he stayed in America.

Sadly, within a few weeks of winning his second Canadian championship and before he could have another shot at the PGA he had so narrowly missed out on the previous year, the golfing world was shocked to hear that James Douglas Edgar was dead at the height of his golfing career, aged only 36.

He was found near the steps of his boarding house late one night by his room mate, golf caddie and assistant, Thomas Mark Wilson (also from Newcastle). Edgar had blood gushing from a severed femoral artery in his leg, (probably by a knife wound). He died on 9 August 1921 before reaching hospital. It was reported that Wilson had said that Edgar had tried to tell him something before dying but he could not make out the words.

At first it seemed that the golfer had been involved in a car accident but there was no impact bruising on his body. It was surmised that he had been involved with a woman, possibly married, and some person or persons sought revenge. Nobody was ever charged with the murder.

J Douglas Edgar is buried in Westview Cemetery, Atlanta. His epitaph was quite an accolade from his peers in the world of professional golf. 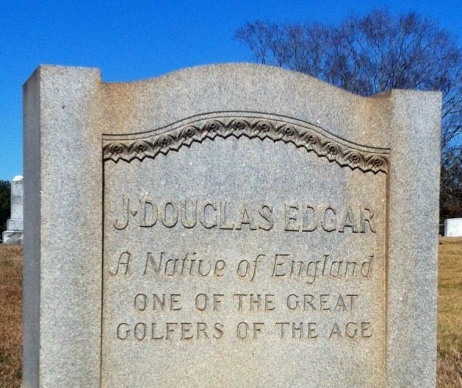 Had he not died in his prime and overseas, J Douglas Edgar would surely have been widely remembered as yet another Newcastle, indeed Heaton, sporting great.

If you know more about James Douglas Edgar or have photographs or anecdotes you’d like to share, we’d love to hear from you. You can contact us either through this website by clicking on the link immediately below the article title or by emailing chris.jackson@heatonhistorygroup.org

Researched and written by Arthur Andrews of Heaton History Group. Thank you too to Jordan Cook, City of Newcastle assistant golf professional, for being so helpful on Arthur’s visit to City of Newcastle Club and arranging a meeting with David Moffat, winner of International and County Honours, as well as being five times Northumberland Champion. Also to the office staff of Northumberland Golf Club.