Heaton History Group member, Peter Sagar, has previously described how Smajo Beso and his family came from war-torn Bosnia in the 1990s to find a warm welcome in Heaton.  This was not the only way  Heaton helped the people of  Bosnia in the Balkans conflicts, as Peter explains:

During the year-long 1984/5 strike,  miners, including thousands in the north east, had enjoyed support from many different quarters.  They included the Bosnian town of Tuzla, in what was then the Socialist Republic of Yugoslavia.  When that republic imploded less than ten years later, it was time for grateful people in this country to return the compliment.  So Workers Aid for Bosnia was established and the key organiser in the north east was a man who lived in Heaton: Tony Parker.

The inaugural meeting of Workers’ Aid for Bosnia was held in London in 1993, partly in response to the lack of action from our government to a war in Europe which had been raging for over a year by then. Bob Myers, who was there, reports that ‘about 60 people came to the meeting and for the first time I heard Bosnian people, mostly refugees, talking about the war.  One woman in particular started to make me think. She explained that from 1984-5, when the British miners had been on strike, Tuzla miners, themselves desperately poor, had given a day’s pay every month for their comrades in Britain’.  That was when it was decided that, with the people of Bosnia suffering terrible food shortages and other privations, it was time to repay the debt.

At the time Tony Parker, who had been a shipyard worker at Swan Hunter’s,  lived in Heaton and was the chair of Heaton Labour Party. He worked at Wallsend People’s Centre. Amer Ratkusic reports that Tony attended an important fundraising meeting in Manchester in 1994, where it was decided how aid would be transported to Bosnia.

In the book, TAKING SIDES; against ethnic cleansing in Bosnia, which documents the way that people in Britain and other countries helped Bosnians during their darkest hours, it is noted that in all there were 15 convoys of aid to Tuzla and other places in Bosnia.  It is a great testimony to the work done by Tony that four of these convoys included lorries specifically from Tyneside. That is in addition to lorries and convoys from other parts of the UK which will have included contributions from Tyneside. This way, a lot of food and clothing from places such as Heaton made its way to Tuzla, a place which saw its share of brutal and callous violence.

The worst atrocity took place on 25 May 1995 during commemorations of former President Tito’s birth and Youth Day in the former Yugoslavia.  It was a beautiful spring day and the local basketball team had just won a regional tournament. Although they did not have money like they did in other parts of Europe or for that matter had had in Tuzla a few years earlier, hundreds of young people from different ethnic and religious backgrounds gathered in a square in the centre of the town to enjoy being together and to celebrate. But a single shell from Serbian forces soon shattered this celebratory scene. The shell hit the square, killing 72 young people.

The fear of further shelling meant that the young people were buried under the cover of darkness. Normally they would have been buried in separate cemeteries, for Muslims and Orthodox, for Catholics or atheists.  On this occasion the distraught families decided to send a message to the men of hate.  It is reported that the families and loved ones of the murdered young people, ‘decided to bury them together in a public park to show the world, that knew only ‘ethnic war’, that they had all lived together and died together’. 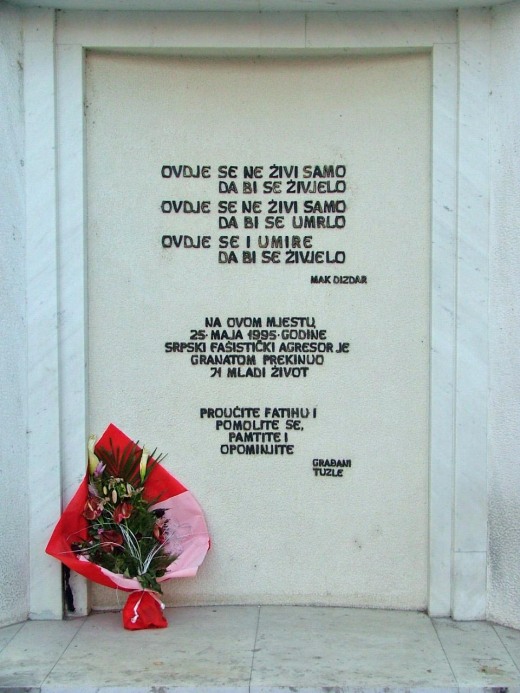 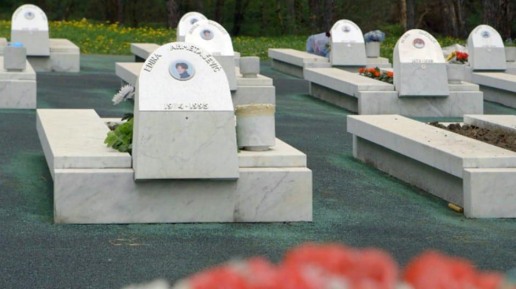 Tony Parker wrote the following poem about the tragedy:

A spring may day, shattered by death

Evil struck from the hiss that day

In Tuzla town on 25th May

To the faceless men, dealers in pain

The innocent lie in a sunny town square

Cordite and coffee smells blend in the air

The rest of the town united in grief

Numbed by shock, they can only shed tears

For a lost generation of such tender years

Hate is the reaper, he gathers his crop

When hate is abandoned, the killing can stop.

It was in response to these kinds of tragedy that Tony Parker and others continued to work hard to put together convoys of aid for the people of multicultural Tuzla.

The convoys which specifically included lorries from Tyneside were the eighth convoy in December 1994, the tenth in August 1995, the eleventh in September 1995 and the twelfth in December 1995. These convoys were often going through the areas were fighting was taking place and people like Tony Parker who joined them were putting their lives at considerable risk.  They also carried hope along with the food and clothing. Some idea of the dangers faced and hope engendered can be seen in this description of the 10th convoy in August 1995, which included a lorry from Tyneside:

‘Lorries from France, Spain, Ireland and Britain converged in Split. During a two day hold up on the Herceg-Bosnia border, the escalation of the war led to nervousness amongst the many ‘first timers’. People listened for news bulletins.  Rumours came and went.  After we crossed into Bosnia the fears vanished.

The following night, in a queue of lorries waiting to be escorted down ‘snipers alley’, with young unshaven Bosnian soldiers outside preparing us for the blackout dash, it was possible to dream that maybe this convoy, with its trade union delegations and the growing protests over Srebrenica, might mark a real change. Maybe at last real allies were appearing on the horizon to support those tired, care worn faces, moving around outside in the dark and rain, defending their multicultural bastion.’

Some of the food on the lorries from Tyneside was collected outside the Kwik Save store on Chillingham Road. Tony and a colleague also provided administrative support for the local Bosnian club, based in the old Heaton Library.

Sadly, there was one lorry, which never got to Bosnia.  In fact, it never got out of Wallsend. It was parked in a car park, waiting to be filled with much needed food and clothing, when it was burnt. It was reported that, ‘the lorry was clearly marked as being an aid vehicle, which makes the actions of the arsonists even more difficult to comprehend….. if the aid is allowed to rot in a warehouse it will be a victory for those of sick mind’,  an attempt by one or two people to undo the hard work and kindness of so many more.

It has also been reported that a large number of Bosnians, including some who had been inmates at the notorious Omarska concentration camp, helped with the buying of a lorry in the north east. Others of their compatriots, who had stayed behind and been ethnically cleansed from their homes, joined the 17th Brigade of the Bosnian army to regain their homes.  Heaton’s Tony Parker wrote a poem about one of those in the 17th Brigade:

Darkness shrouds you once again

Creeping shadows across the plain

Tracers reflected in your eyes

Searching out a deadly path

Barrage of death, will it cease?

Will the daylight bring release?

Thoughts of home flood your brain,

They carry you above the pain

Omarska camp is your inspiration

And now your thirst for liberation

Some day you will sit in the shade

And never have to be afraid

Peter has fond memories of a barbecue and party with the Bosnian community at Ouseburn City Farm in August 1994:

‘I brought my guitar along and contributed a few songs, while the real musical entertainment came from a Bosnian playing the accordion.  He played a number of tunes from home – and, of course, the obligatory Beatles tune!  One of the Bosnians was a vet and ironically, he was the person who had acquired a lamb and prepared it for the barbecue. I well remember the deceased lamb busily going round on a spit, while other lambs were merrily going about their business in the farm.  Meanwhile there was a sign up on a fence saying, “Barbecue for Bosnian refugees. NOT one of our lambs”!’

‘Tony Parker and others from Heaton  and beyond did a magnificent job of helping people in Tuzla in their darkest hours and repaying a debt from the miners’ strike. The story is a timely reminder of what the best in the human spirit, our generosity, our empathy with those in need and our willingness to put our own personal safety aside in order to help others, can achieve when confronted by the worst of humanity. When other people needed support,  Heaton responded.’

If you know more about anyone or anything mentioned in this article or have photographs or anecdotes you’d like to share, we’d love to hear from you. You can contact us either through this website by clicking on the link immediately below the article title or by emailing Peter Sagar at peter0462@gmail.com

1 thought on “Workers Aid for Bosnia: the Heaton connection”