Heaton and Armstrong Parks and Jesmond Dene, now known collectively as Ouseburn Parks, are amongst the finest green spaces in the city, or indeed any city, and much loved by locals and visitors alike. But have they changed much over time? We’ve been digging around in the archives and listening to the reminiscences of some older residents.

In the 1870s the population of the East End of Newcastle was growing rapidly and a need for additional recreational space was recognised but, in a comment that resonates today, on 16 May 1879, the Journal wrote:

Owing to the difficulty in obtaining land… and owing also to the jealousies amongst the representatives of the different wards of the town in the Corporation and also to the general unwillingness to expend the funds of the Corporation upon such an object, the movement for a long time made no progress Journal , 16 May 1879

However in 1878, when Addison Potter of Heaton Hall put some land up for sale, the Corporation bought 22.5 acres at a cost of £12,562 and William Armstrong gave a similar amount to enable a 46 acre park to be created.

Just a year later, the southernmost portion of the new park, that purchased by the corporation, had been landscaped with new ‘walks and drives’ and in a scheme which:

a new road was built to allow access to the park from Byker. This still to be named ‘new road’ later became Heaton Park Road.

The new ‘Armstrong or East End Park’ was officially opened on 12 June 1879 on a day locally observed as a holiday. The mayor assured the assembled school children that:

one object which the Parks Committee had in view was to give them as much play-ground as possible, so that they could romp free from the interference of the police or anyone else.

There have been many alterations to the park over the subsequent 135 years or so, some of which we can see from looking at old photographs like those below: the bear set free from (or more likely died in) its pit by the lake, the lake filled in, the croquet lawn converted to a bowling green (which itself is now no more), the ‘temple’ claimed by its original owners, the Ridley family, and removed to Blagdon, the park-keeper’s cottage demolished, the large pavilion burnt down and a replica subsequently constructed and famously the old bowls pavilion burnt down by suffragettes. 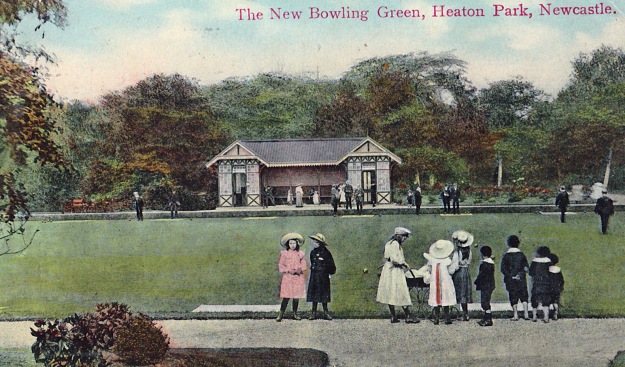 We can also learn from the writings of Jack Common, a frequent visitor to the park. In his autobiographical novel ‘Kiddar’s Luck’, he wrote about the first and second decade of the twentieth century:

The far side of Heaton Road for a stretch broke into the great rookery of Heaton Hall; and behind Heaton Hall grounds, along one side of the Ouseburn Valley, lay two parks, both public and continuous, except for the slight interruption of a leafy stone-walled lane.

The parade wound by two bowling greens, mathematical swards scribbled on by tree-shadows, and watched by a terrace on which stood a huge aviary holding up the dial of a southward facing clock, flower beds of painfully formal calceolaria, scarlet geranium, lobelia, or a sort of clay boil bursting through turf to shatter into certified bush roses.

But there is much that has never been officially recorded and this is where the recollections of park users are invaluable. We have been interviewing local people to fill in some of these gaps and Heaton Park is almost always a topic which prompts a host of early memories.

Norman Pretswell, who lived at 9 Cardigan Terrace from 1928, recalled the 1930s:

The pavilion, of course, with the pigeons in one side, the old men on the other side. The old fellahs used to sit and play dominos or whatever. It used to stink of tobacco, especially pipes. I don’t remember any exotic birds. I only remember the pigeons. It used to be full of pigeons, roosting and nesting. They could fly in and out whenever they wanted…

We’d play in the bushes where you weren’t supposed to go. There was a park-keeper in those days. He had a whistle and a stick and he’d wave the stick and blow his whistle if he saw you in the bushes. Of course we used to go in the bushes for hide and seek…

In Armstrong Park, we’d play near the windmill and the cannons that were near where the tennis courts are now. We’d play on them…

And when you went through Armstrong Park, there was a little cafe, not far from the entrance where you left Heaton Park and went into Armstrong park, there was a little cafe there. Very dark and dismal. The fellah who served was quite short… he could hardly see over the counter. We’d go in. It was a bit of a thrill. It was just so dark and gloomy. I never seemed to go there when there was a light on. We’d go in for lemonade, sasparilla. Dandelion and burdock was my favourite.

John Dixon who lived at 155 Heaton Park Road in the 1950s and 60s also remembered the park-keepers:

As you go through the Heaton Park Road gates on the left, there was a wooden stand and they used to ring the bell. There were other bells in the park. They used to ring it half an hour before the park closed because they used to lock all the gates…

The park keepers wore a sort of uniform, which was a military style cap, blue serge two-piece suit, a collar and tie, a gabardine coat when it was wet and they had a whistle and a stick and if you transgressed, which it was very easy to upset them, they used to blow their whistle at you.

There were swings, a slide, wooden swings which were lethal. The seats were like inch thick planks… the swing would come back and hit you on the back of head. My mate, we had to take him to the RVI to get his head stitched. It really burst it. Lucky he didn’t fracture his skull.

We are hoping to collect more memories of Heaton’s parks. If you can add to our knowledge, have any photographs which illustrate the changes or would just like to share your stories, please leave them here (Click on the link just below the article title) or email chris.jackson@heatonhistorygroup.org